Posted by Varada's Kitchen
Over a month ago I had promised my daughter I would make enchiladas. But something kept coming up and I could not keep my promise. This week I finally decided to make enchiladas on three consecutive days from three different countries. 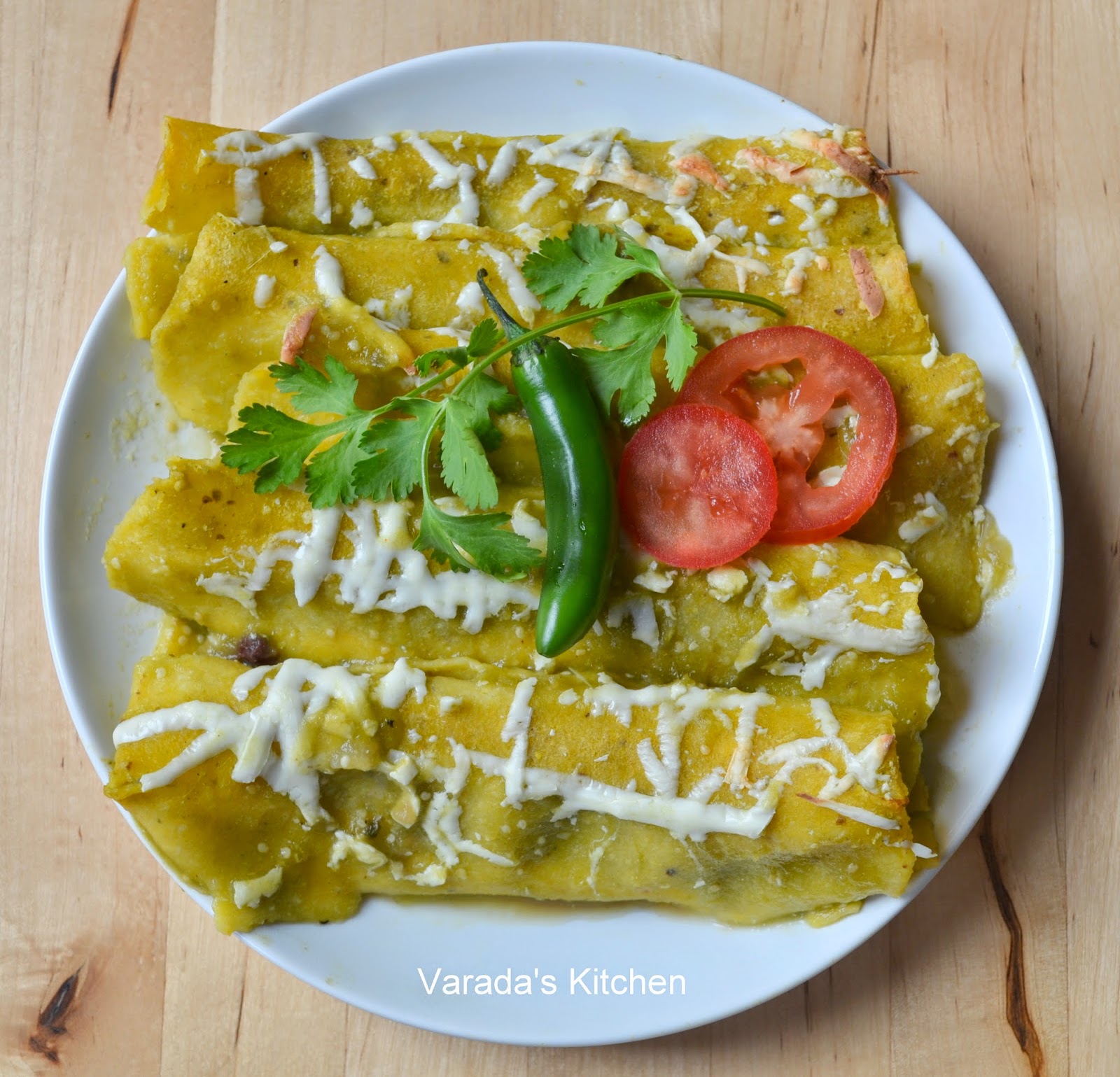 Enchiladas are usually made of corn tortillas with a protein/vegetable mixture topped with cheese and a sauce. This basic concept is served in very different ways in the three countries I chose. The first is from south of the border, Mexico. The other two are from Honduras and Guatemala. I will post those recipes over the next two days.

When we lived in Arizona, our favorite restaurant was a Mexican place that specialized in food from Mexico city. Most other restaurants served Sonoran Mexican food that we were not really fond of. Sonora for those who do not know is the Mexican state adjoining Arizona. The enchiladas I made today are very similar to those from our favorite restaurant. My daughter simply adores them. 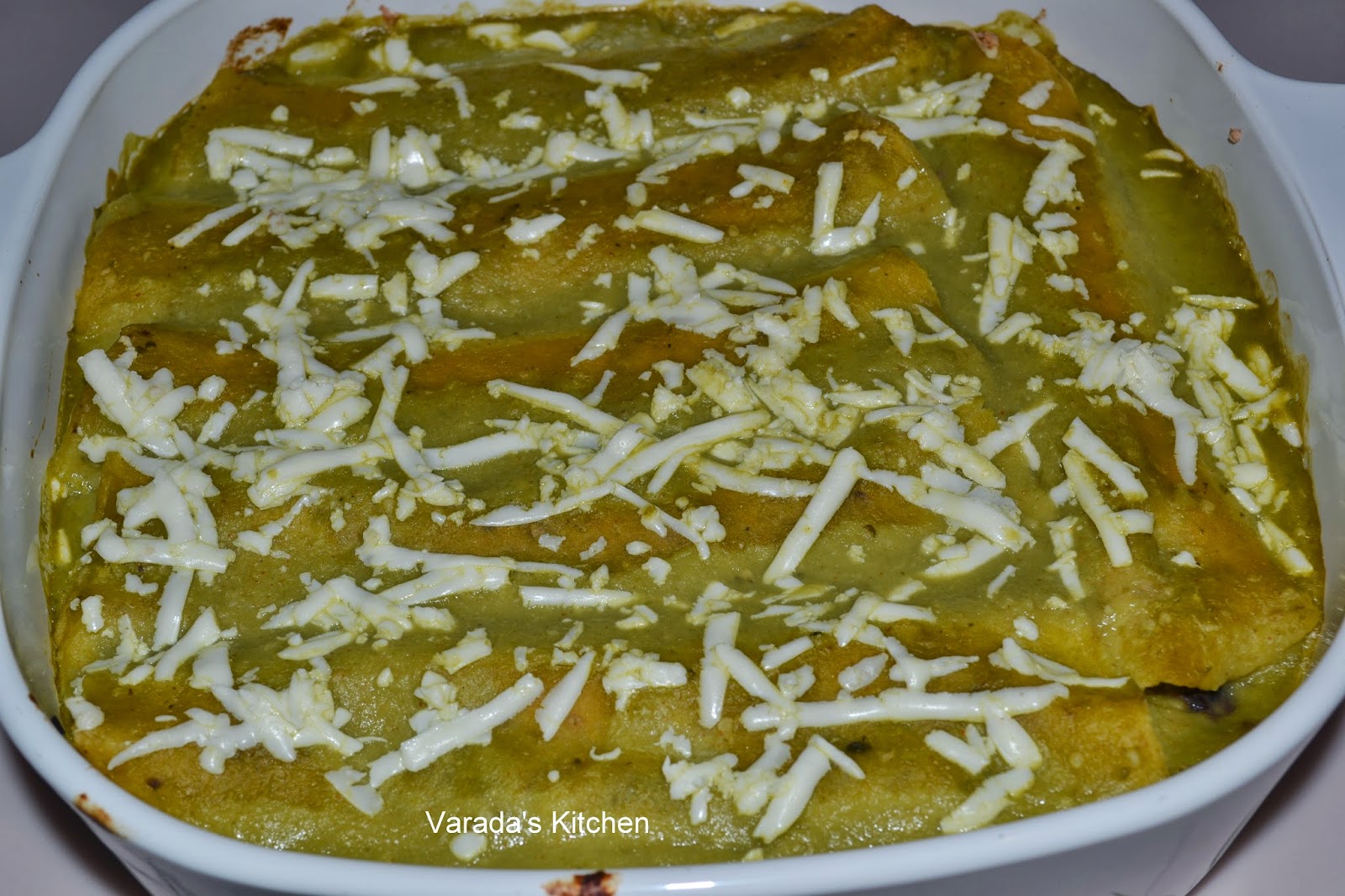 These enchiladas are not smothered in cheese. What makes them so flavorful is the verde sauce made from tomatillos and roasted poblano pepper. The sauce goes very well with the Cotijo cheese, black beans and corn tortillas. If you can find it use Mexican Cotijo or Chihuahua cheese. If not then cheddar will do. This recipe calls for a lot of little steps but the end result justifies everything.

Soak the black beans overnight and pressure cook them until tender. Skip this step if using canned beans. Dice the onion, cilantro and 1 clove of garlic. 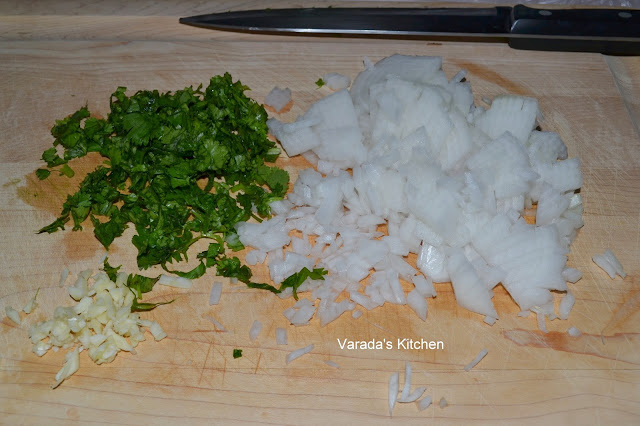 In a pan heat the cooked black beans, onion, garlic and cilantro with half a cup of water. 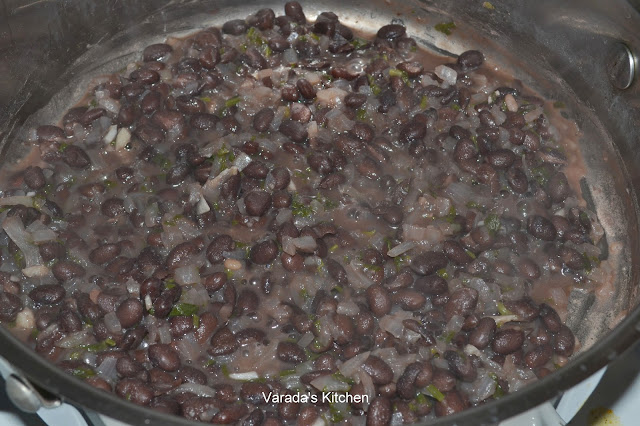 Cook on medium heat until all the water is absorbed, about 5 minutes. Ensure the mixture is dry. Turn off heat, cover and keep aside. 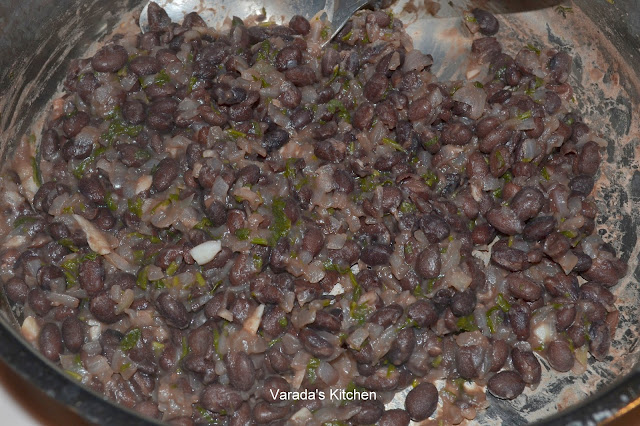 Meanwhile in a pan roast the poblano pepper until the skin is charred. When done wrap the pepper in aluminum foil and let it sit for a few minutes. Cook the tomatillos, remaining clove of garlic and the serrano pepper in 2 cups of water. If you like a little heat in the sauce use two serrano peppers. 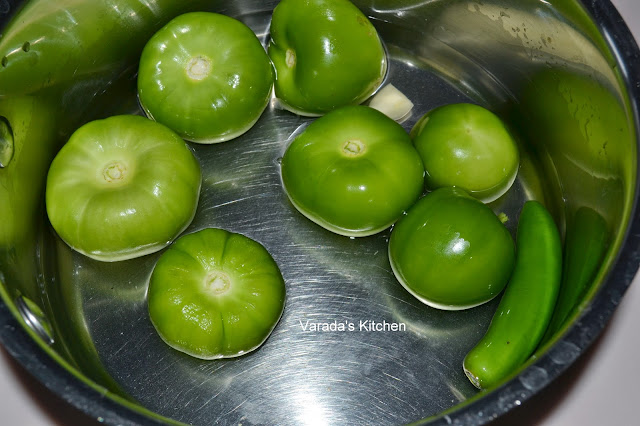 When the tomatillos are completely cooked turn off the heat. 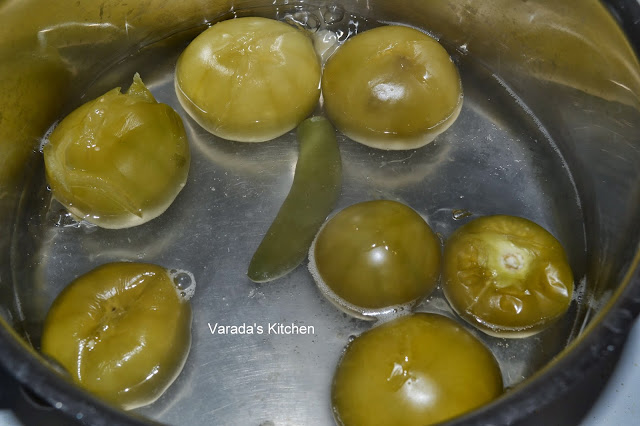 Take the poblano pepper out of the foil and scrape the charred skin off. Cut it open and remove all the seeds. 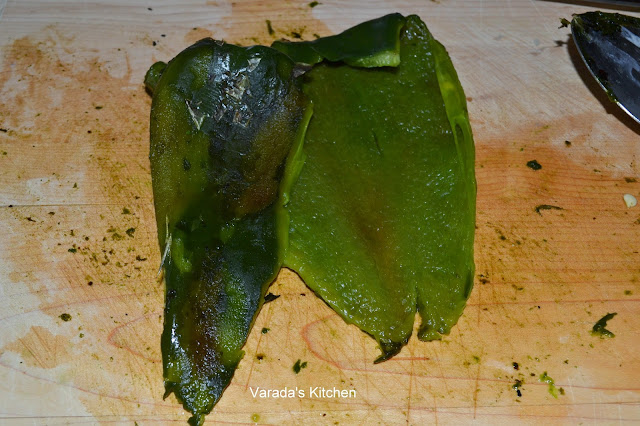 Chop it up and put it in a blender along with the cooked tomatillos, garlic and serrano pepper. You may want to remove the seeds of the serrano pepper to cut down the heat. Blend with a little of the water that was used to cook the tomatillos. Season with salt and paprika as needed. The verde sauce is ready. 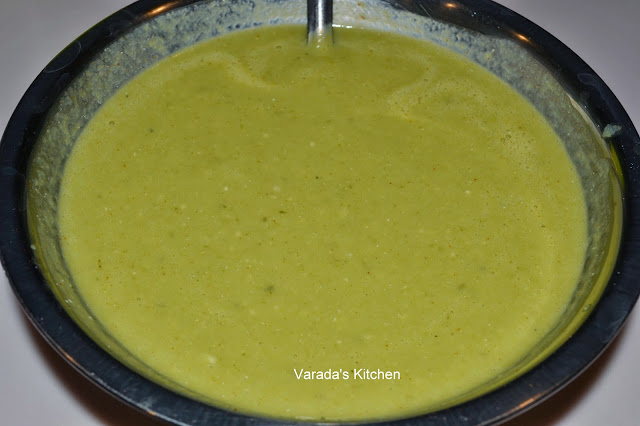 Grate the cheese. Divide the bean mixture into 12 portions. Preheat oven to 350 F. Prepare a casserole dish and line it with a third of the verde sauce. 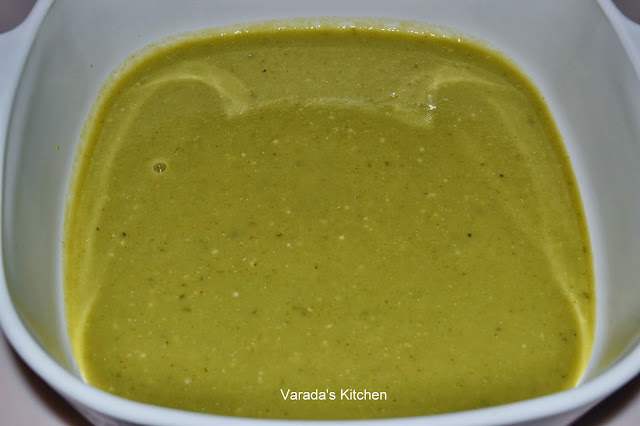 Heat a little vegetable oil in a pan. I used olive oil but made sure the heat was low enough to keep it from getting too hot or smoking. Put one tortilla in the pan and let it sizzle for about 15 seconds. Turn it over and repeat for the other side. Remove from the oil and drain. Do not fry for more than 15 seconds, you do not want crisp tortillas. Repeat for another 5 tortilla. Turn off the heat. Work quickly to prevent the tortilla from drying out. 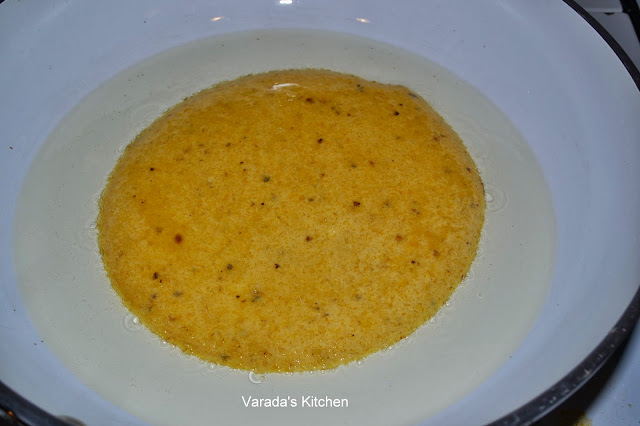 On a work surface place one tortilla. Fill it with one of the 12 portions of the bean mixture and a little grated cheese. 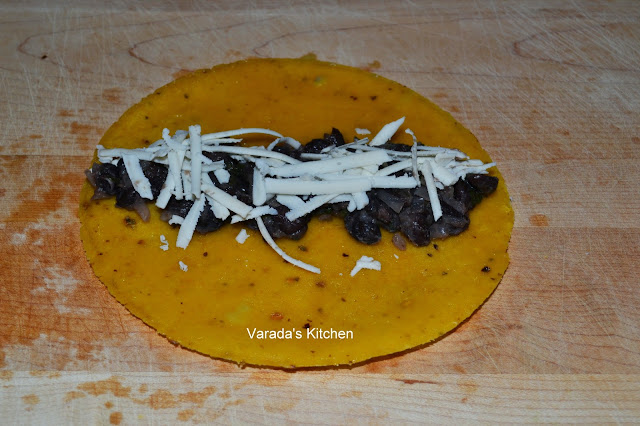 Roll it up tightly and place in the prepared casserole dish. Repeat for the remaining 5 fried tortillas. 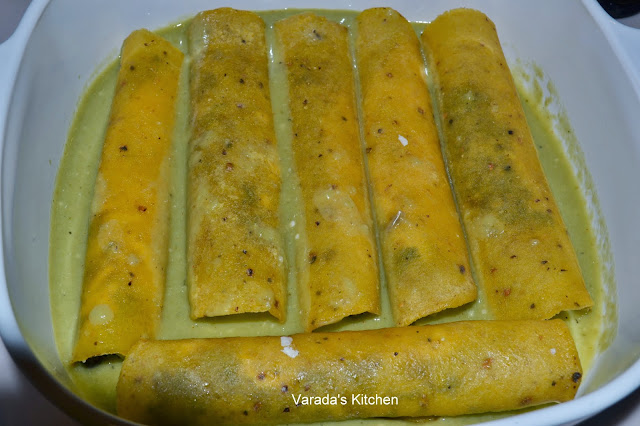 Pour half of the remaining verde sauce over the top of the tortillas and sprinkle with cheese. 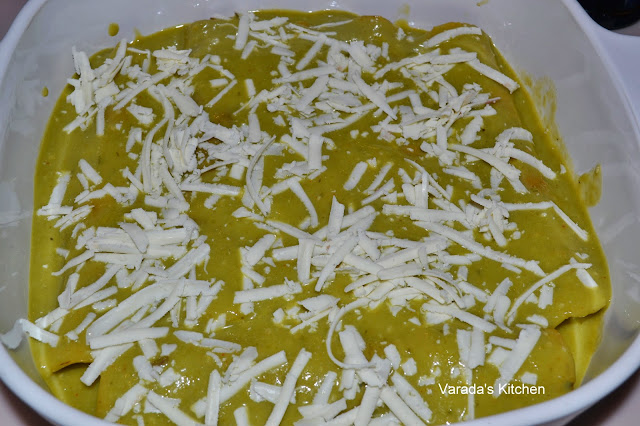 Fry the remaining 6 tortilla, stuff with beans and cheese, roll and place in the casserole dish to form a second layer. Pour the remaining verde sauce over the top and sprinkle the remaining cheese. Do not cover the enchiladas completely with cheese, use just enough to flavor the dish. 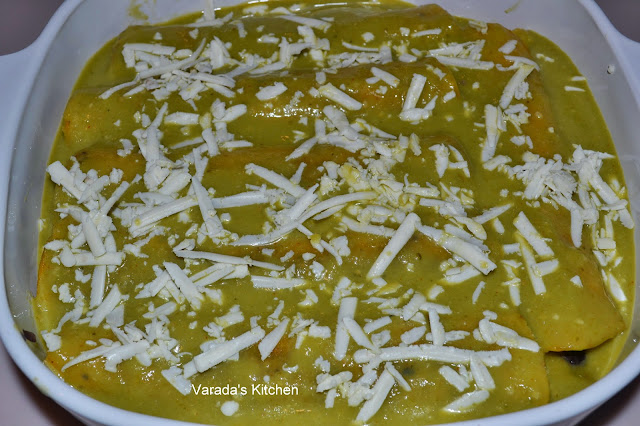 Bake in the oven for 25 minutes or until the sauce is bubbling and cheese is just melted. Remove from oven and let it rest for 5 minutes. 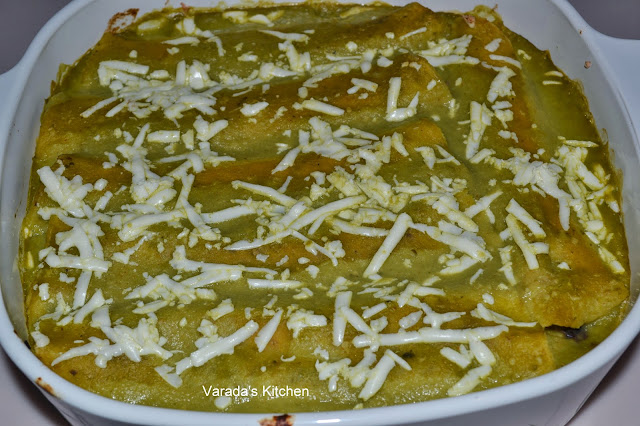 Serve hot on its own or with Mexican rice. 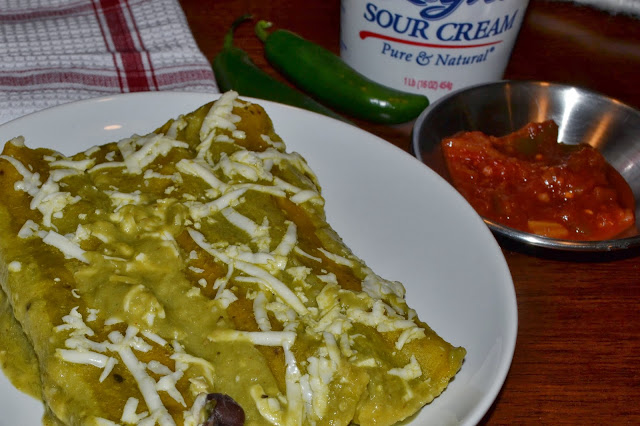