Everyone at home had the day off yesterday, President's day. My teenage daughter spent a good deal of the long weekend with friends. Yesterday she was going out with a friend for lunch and then to work on a project. I decided to entice her with a dish that she would simply not be able to resist. 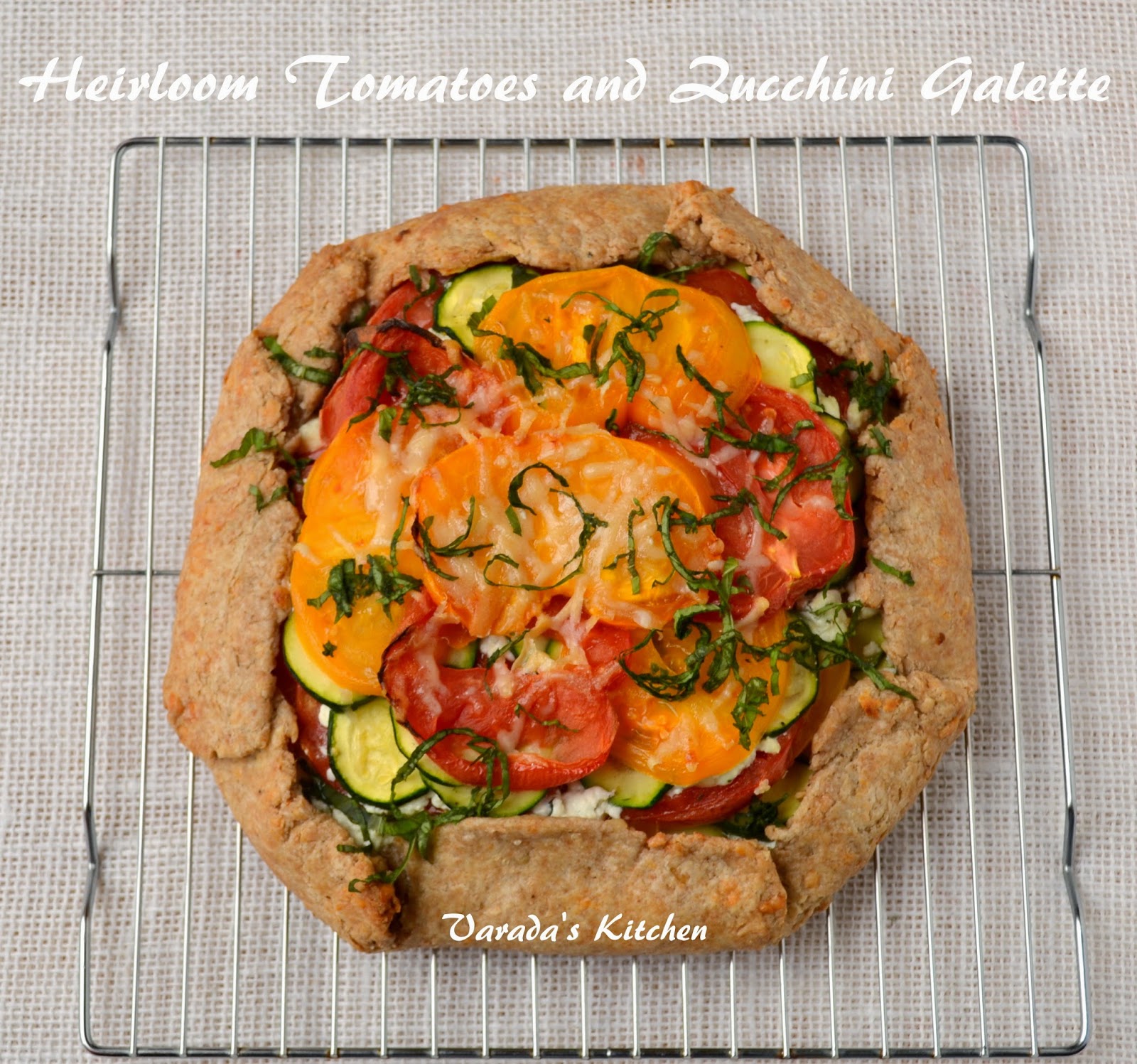 Galette is a rustic French pie. It is baked on a sheet instead of a pie dish and the edges are folded in instead of being intricately shaped. I have always wanted to try the galette. Goat cheese seems to be the recommended cheese in most recipes so I knew I was going to use that. A few months ago I found vegetarian goat cheese at Whole Foods that I love. For vegetables I knew I wanted to use heirloom tomatoes but they are available only in Spring and summer. So when I found the first of these heirloom tomatoes in the market yesterday I decided I was going to bake a galette. I got some organic zucchini at Whole Foods along with some fresh basil. 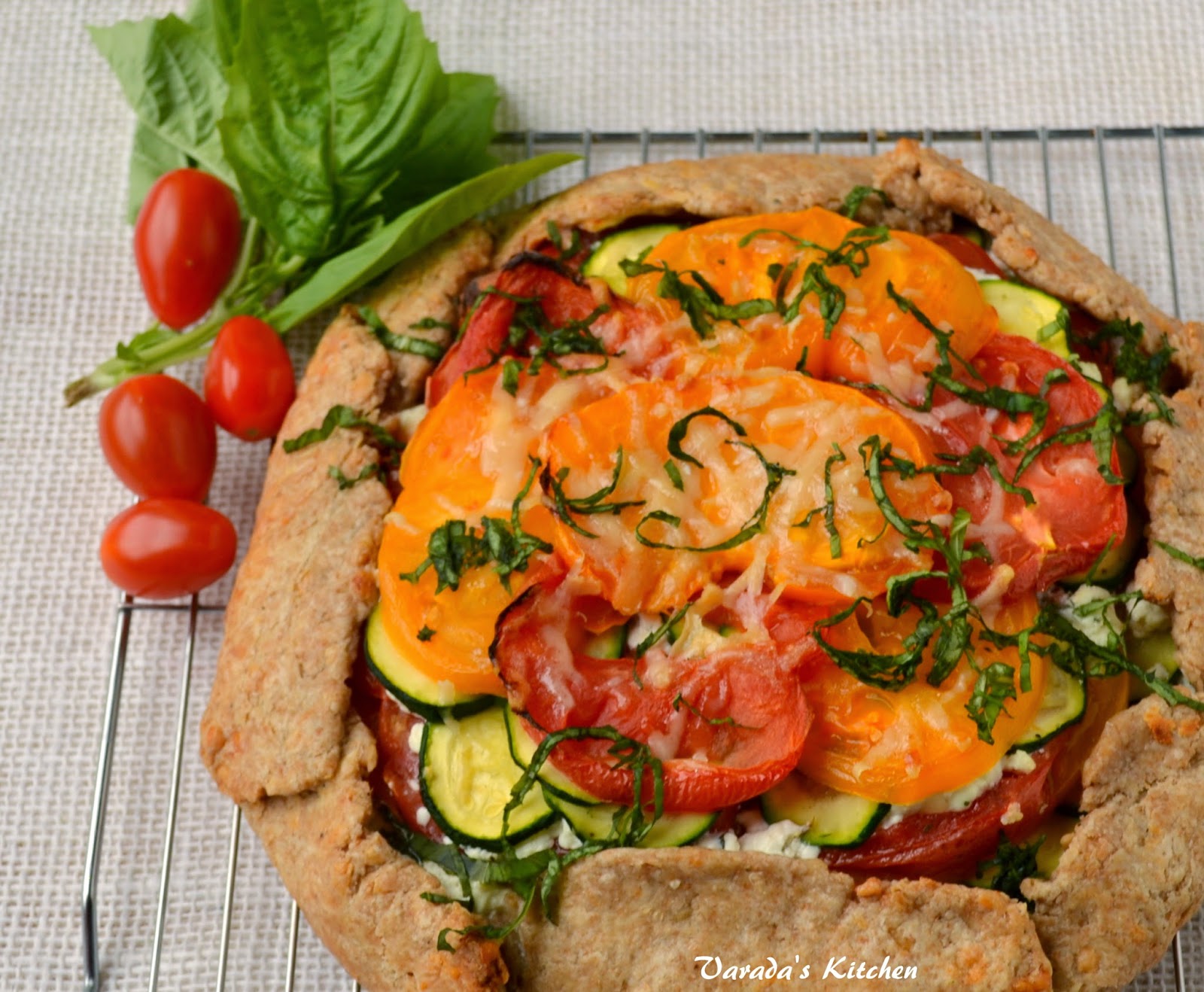 I made the pastry crust at home using mostly whole wheat flour. I used cold butter and water to get the crust flaky. For added flavor I grated some parmesan cheese into the dough for the crust. I drained the sliced zucchini and tomatoes for half an hour so the galette would not get soggy. I mixed in fresh thyme with the goat cheese and added lots of black pepper to everything. The galette came out of the oven 15 minutes before my daughter was to leave. As expected she asked for a small slice and one bite later asked if she could have a bigger slice. 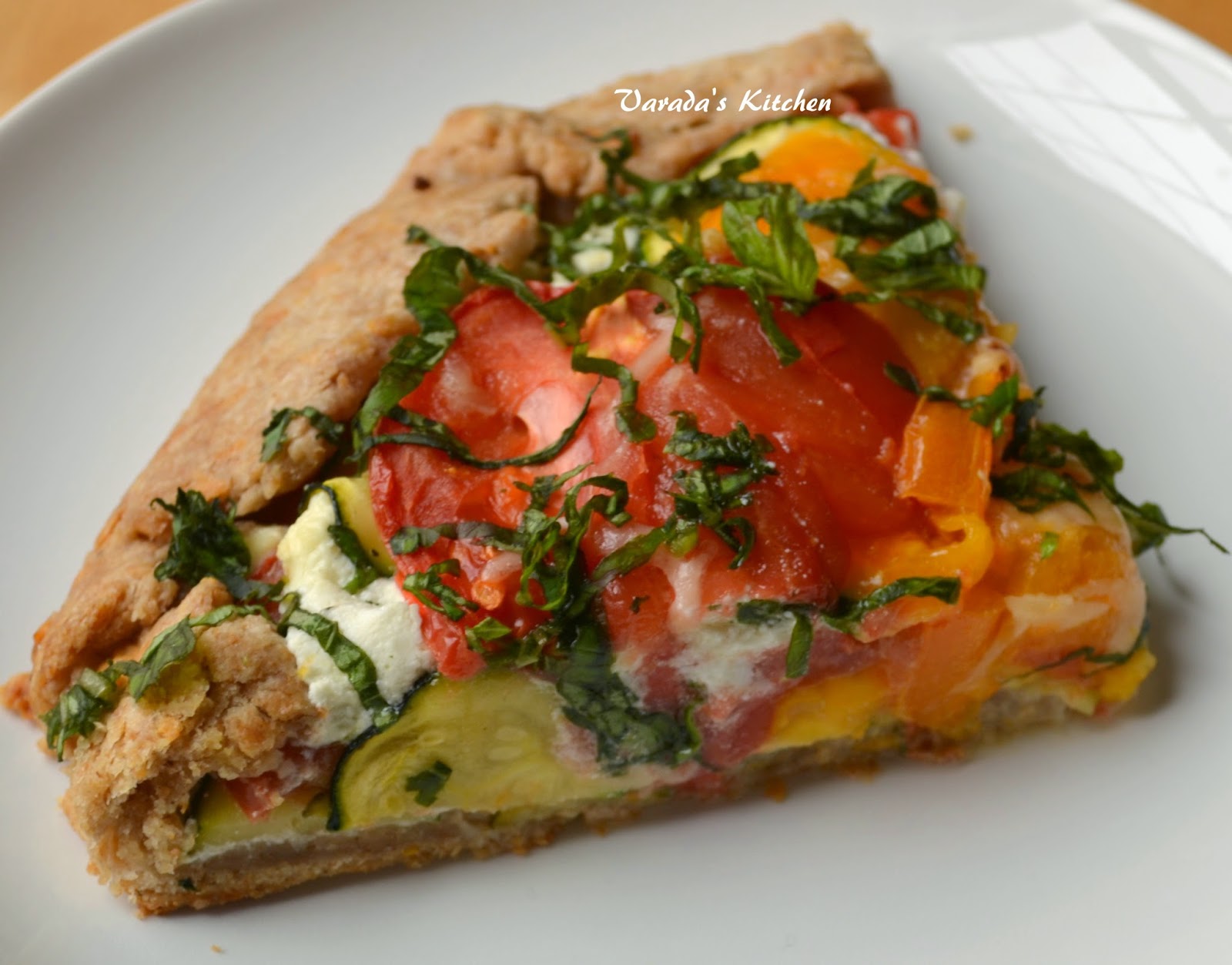 In a mixing bowl and using a pastry cutter mix the cold butter with the flour until the flour is grainy in texture. Sprinkle the salt. Now working in small sections moisten the flour using a tablespoon of cold water. Move to the next section to moisten it. Repeat until the flour is moistened and can be worked in a dough. Do not add too much water. The amount of water will depend upon the amount of whole wheat flour used. Add the parmesan cheese and black pepper. Roll up the dough in plastic wrap and refrigerate for 15 minutes. Remove the cold dough from the refrigerator and roll it out to the desired size. Place a parchment paper on a baking sheet. Place the rolled dough over the top. Cover with the plastic wrap and place the sheet in the freezer for 15-20 minutes. 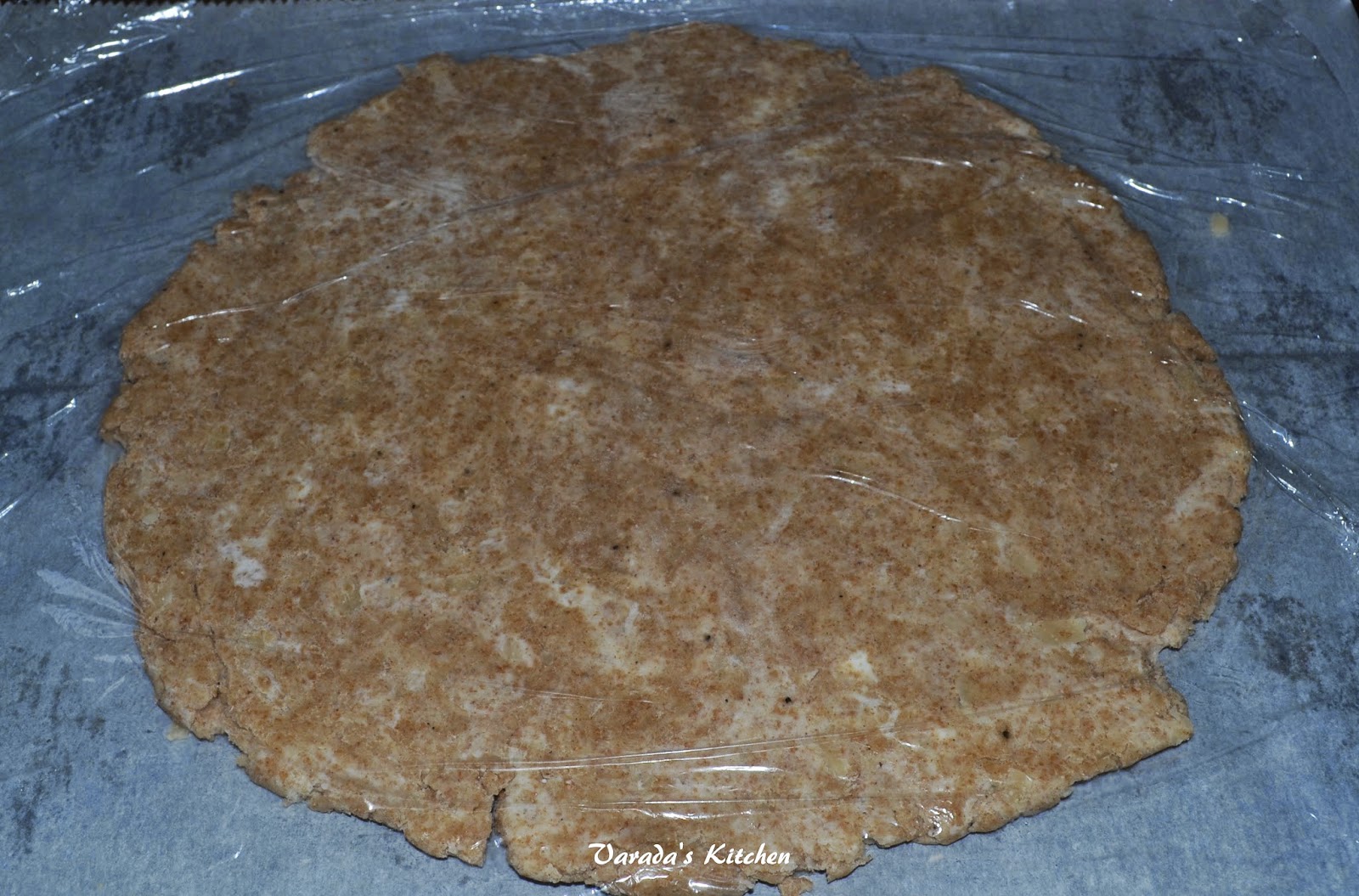 Preheat the oven to 425 F. Slice the tomatoes and zucchini separately. Sprinkle a little slat and allow it to drain. Meanwhile in a bowl mix the thyme with the goat cheese. Add a little black pepper and mix with a fork until crumbly. Keep aside until needed. 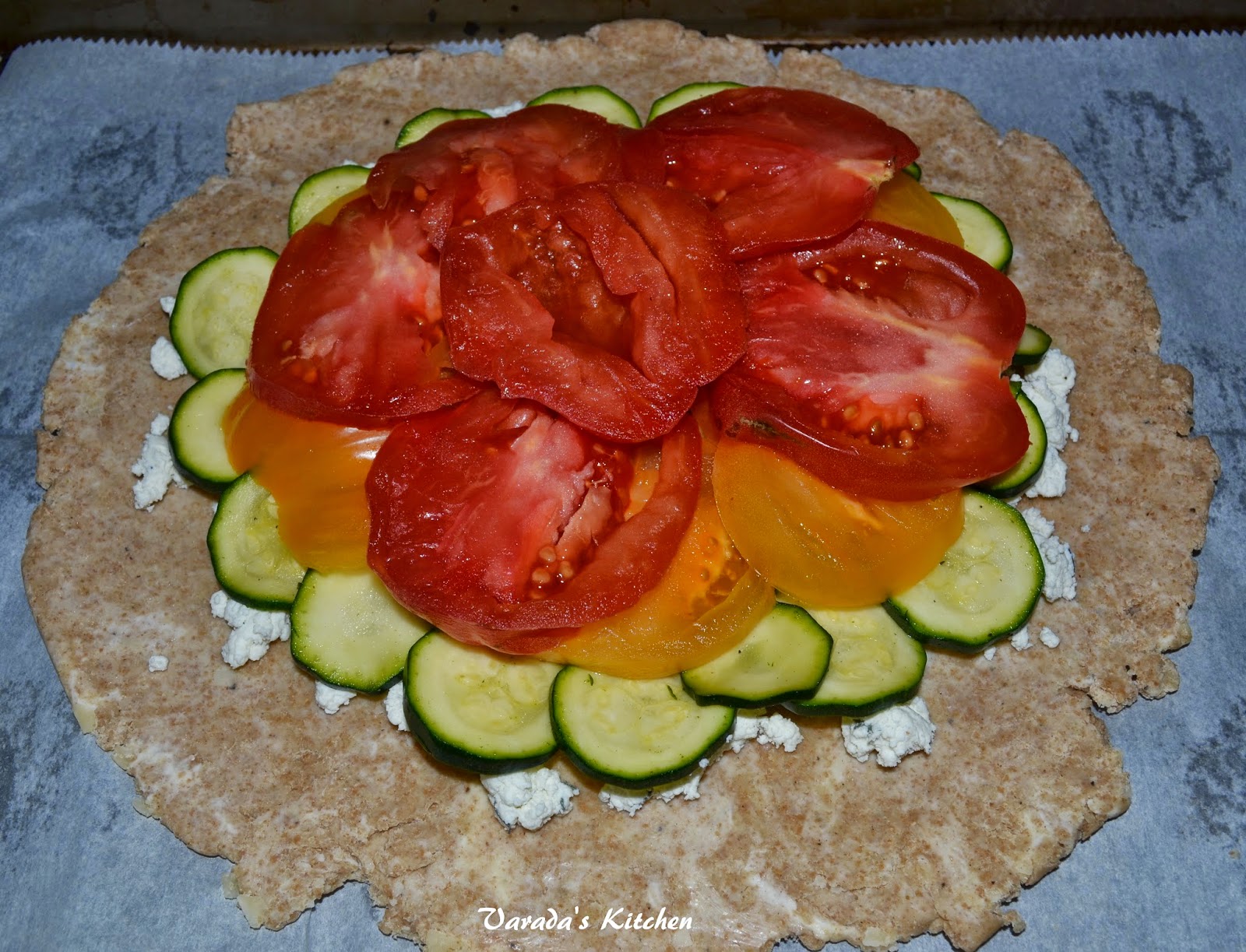 Fold in the sides over the vegetables. Grate some Parmesan cheese over the top. 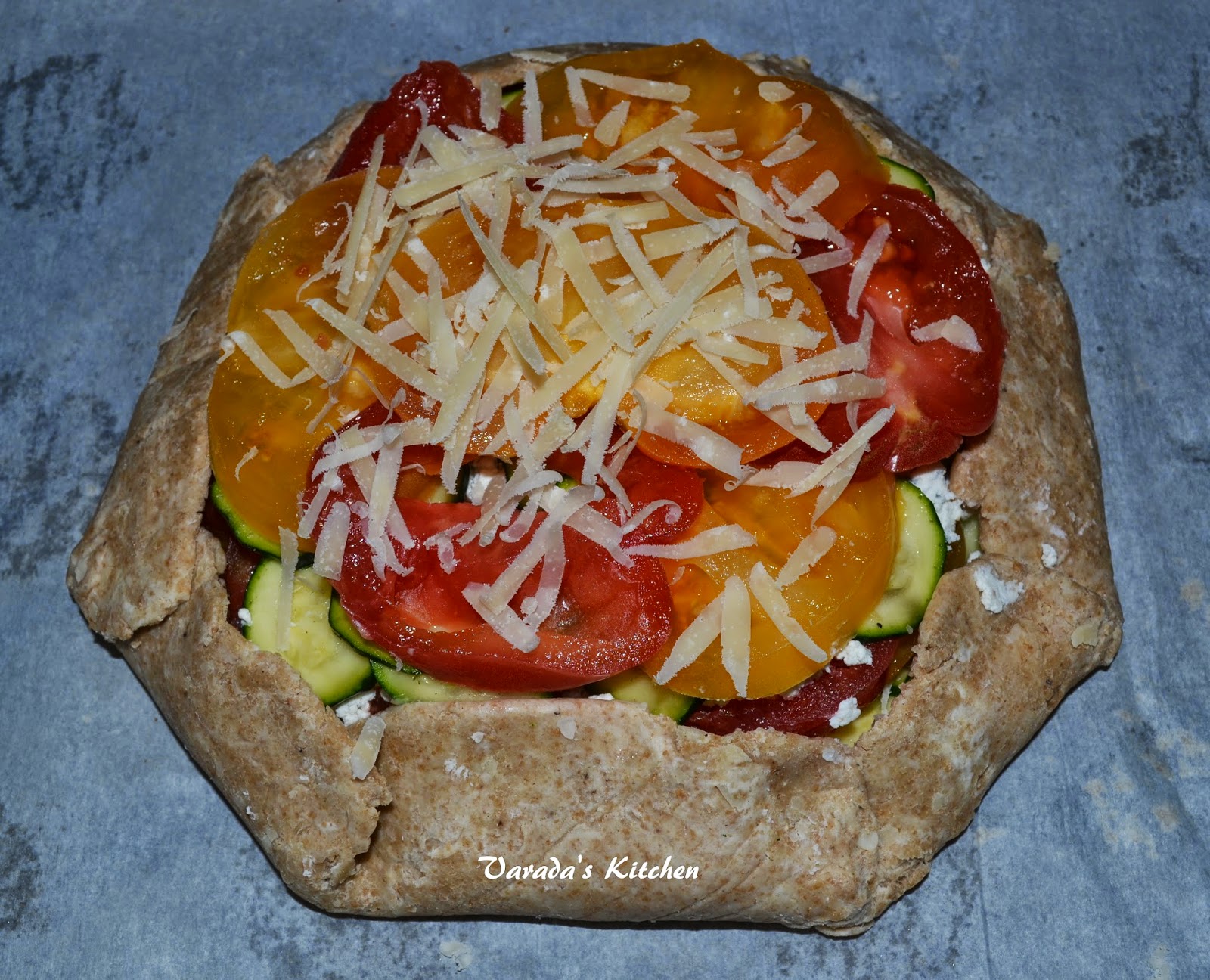 Bake for 30-40 minutes or until the crust looks brown and flaky, the vegetables are cooked and beginning to brown. Make a chiffonade of basil. You do this by placing the leaves one over the other, rolling it up and then slicing as finely as you can. Separate the strands and sprinkle over the baked pie.

Let it cool for a 5 minutes before cutting and serving.