During the last short school break my daughter was tired of the same old afternoon snack and I wanted to try something new. I happened to see this picture on Pinterest and decided I had to make it. It looked like one of those breads that you can have fun while shaping. 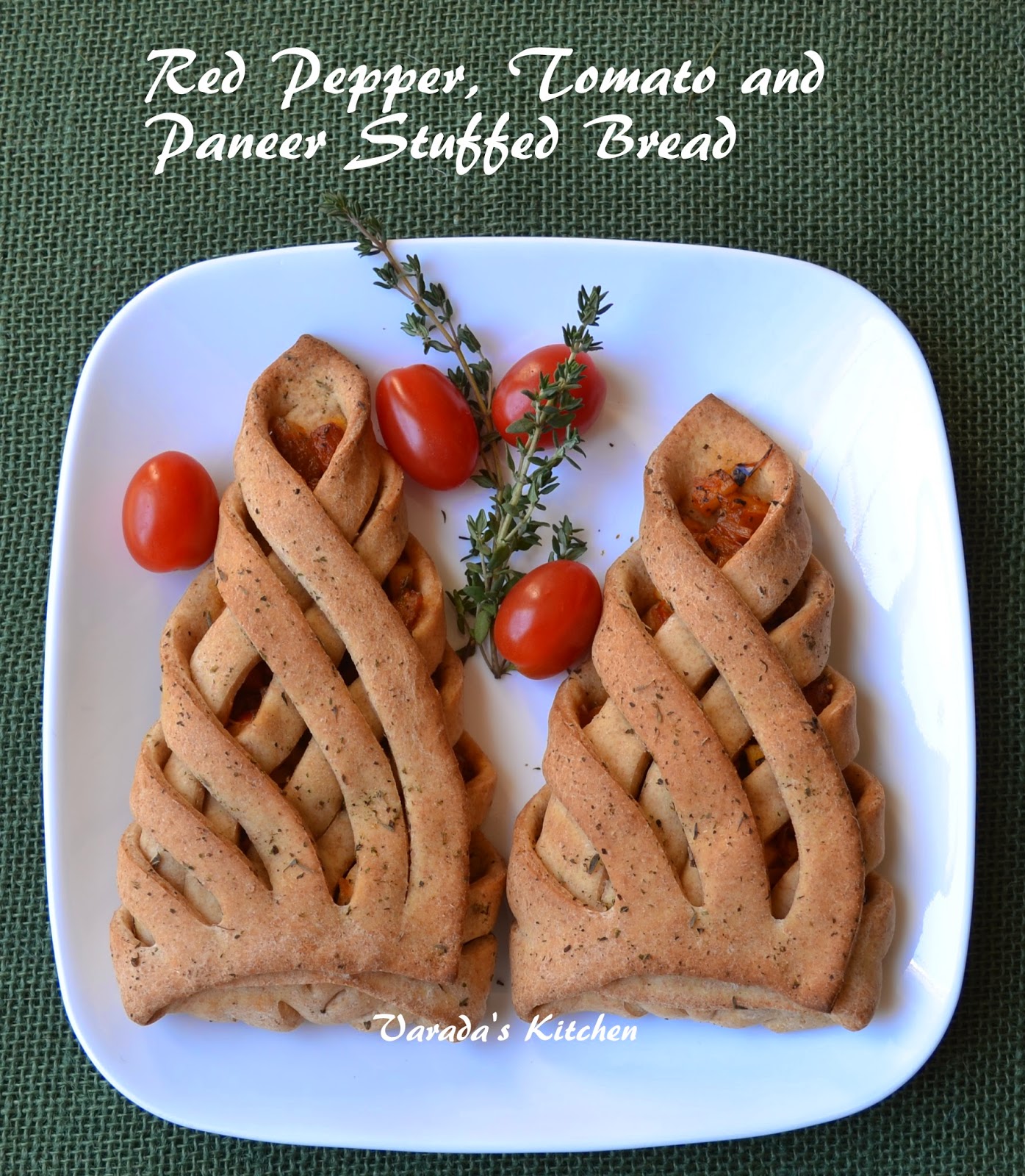 I looked in the refrigerator for ideas on what I could use as the filling. I found some left over yellow pepper that had to be used up and some paneer. I added some cherry tomatoes, some fresh thyme and some dried herbs. In no time I had a very flavorful filling. When I began to knead dough for my favorite bread dough recipe my daughter became curious. She wanted to know what I was baking. I think I fed her too many stuffed buns and she kept asking if I was making some more. I won't be making stuffed buns for a while. She was glad I was making something different and offered to help. We had a great time making this stuffed bread. It is a fun activity with kids especially those old enough to handle a knife.

This is the first of 26 baked recipes I plan on posting this month. The theme this week is fun bakes - fun to make and not just fun to eat.

Meanwhile prep the vegetables. Roast the peppers on a baking sheet covered with foil in the oven set to broil. Then wrap them in the foil for 15 minutes, unwrap, skin the peppers, removed the seeds and dice them. Keep aside.

To prepare the sauce heat oil in a pan and add the tomatoes, onions and all the herbs. Cook it down until almost dry. Add salt to taste and turn off the heat. Mix in the diced roasted peppers and paneer. Allow it to cool. 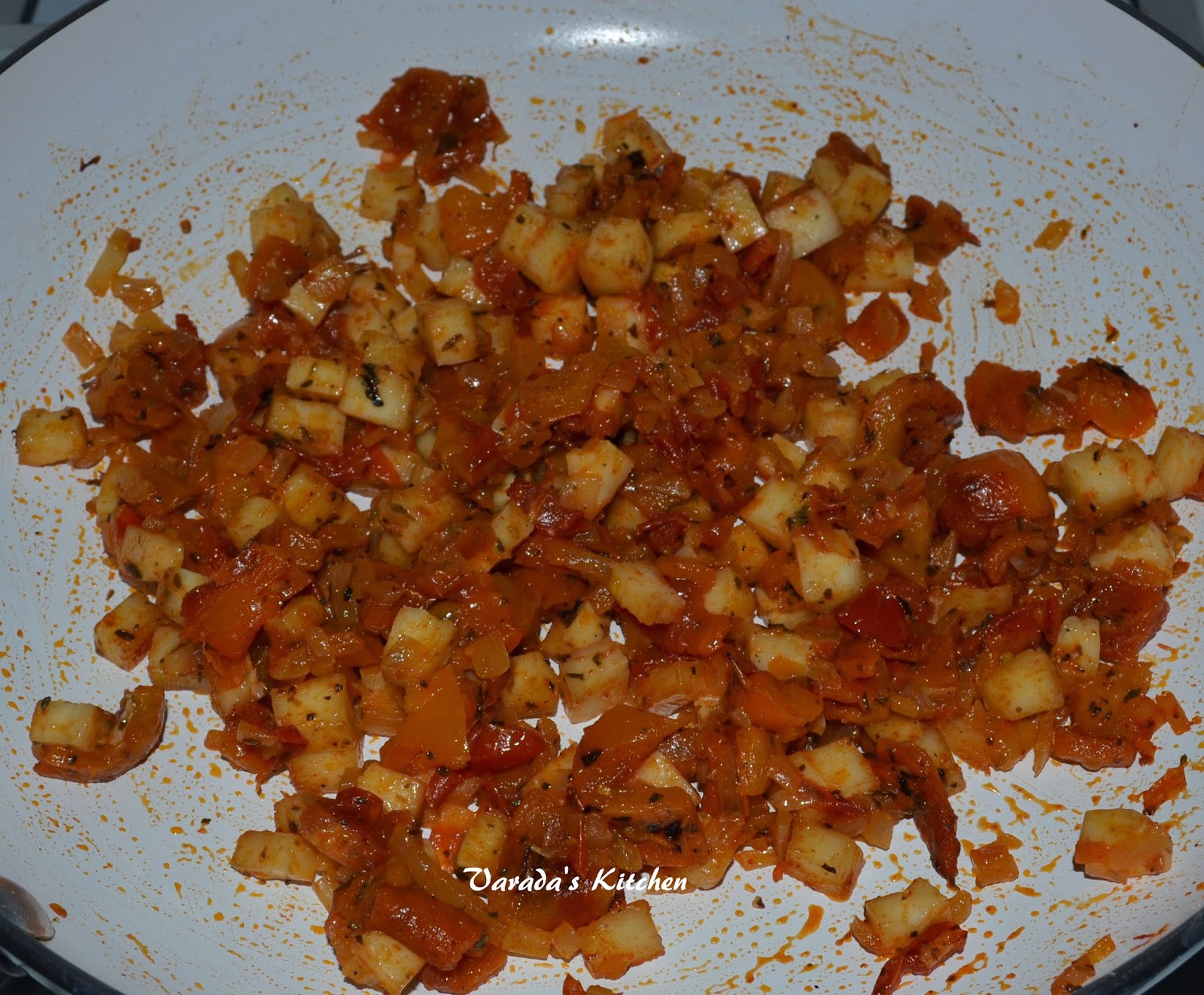 Preheat oven to 400 F. When the dough has risen transfer it to a flat working surface. Cut it into two and save one portion. Using a little flour to keep it from sticking form a round ball. 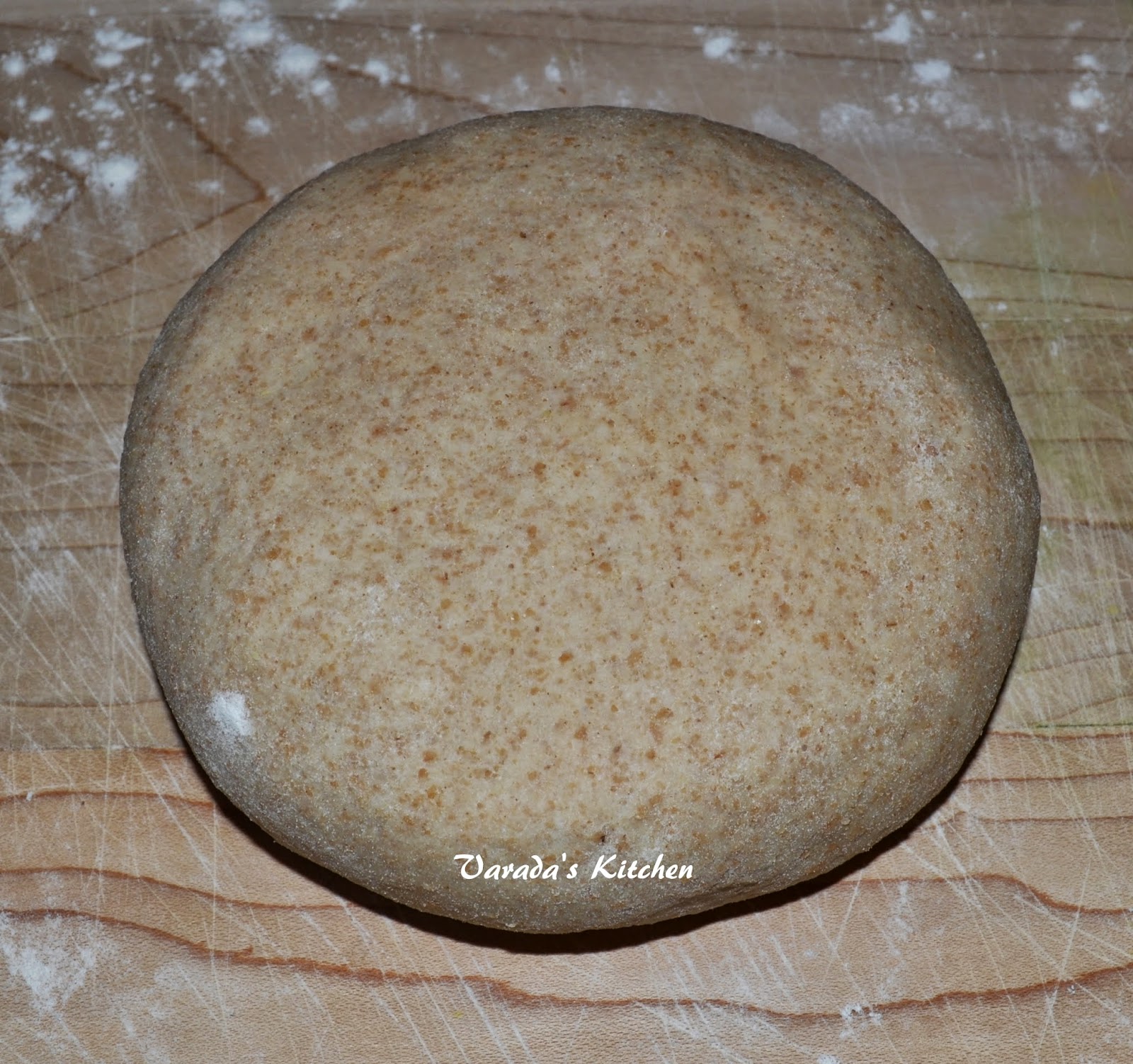 Roll it into a large thin disc. 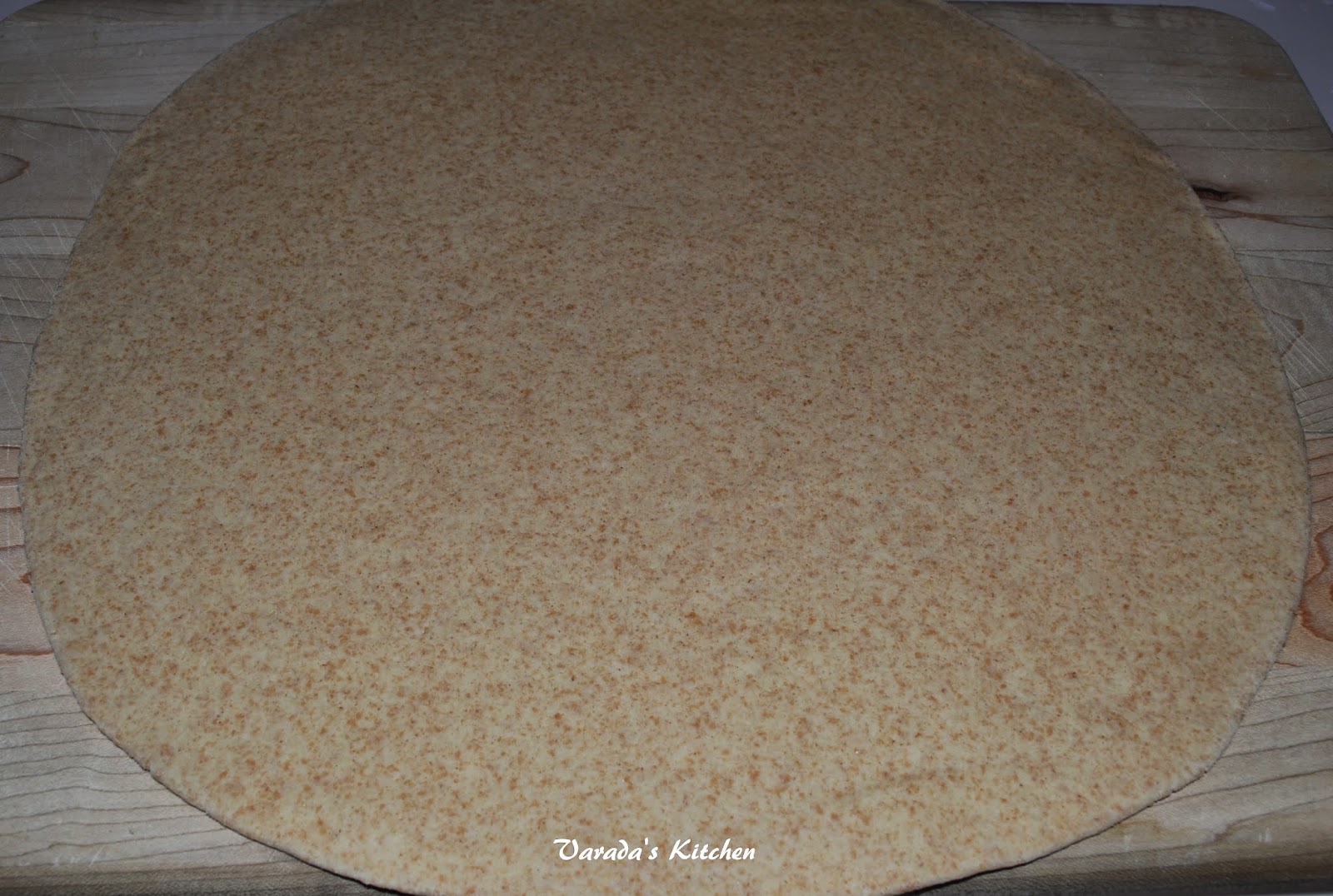 Cut into quarters. Cut a pattern on one of the quarters as shown below. 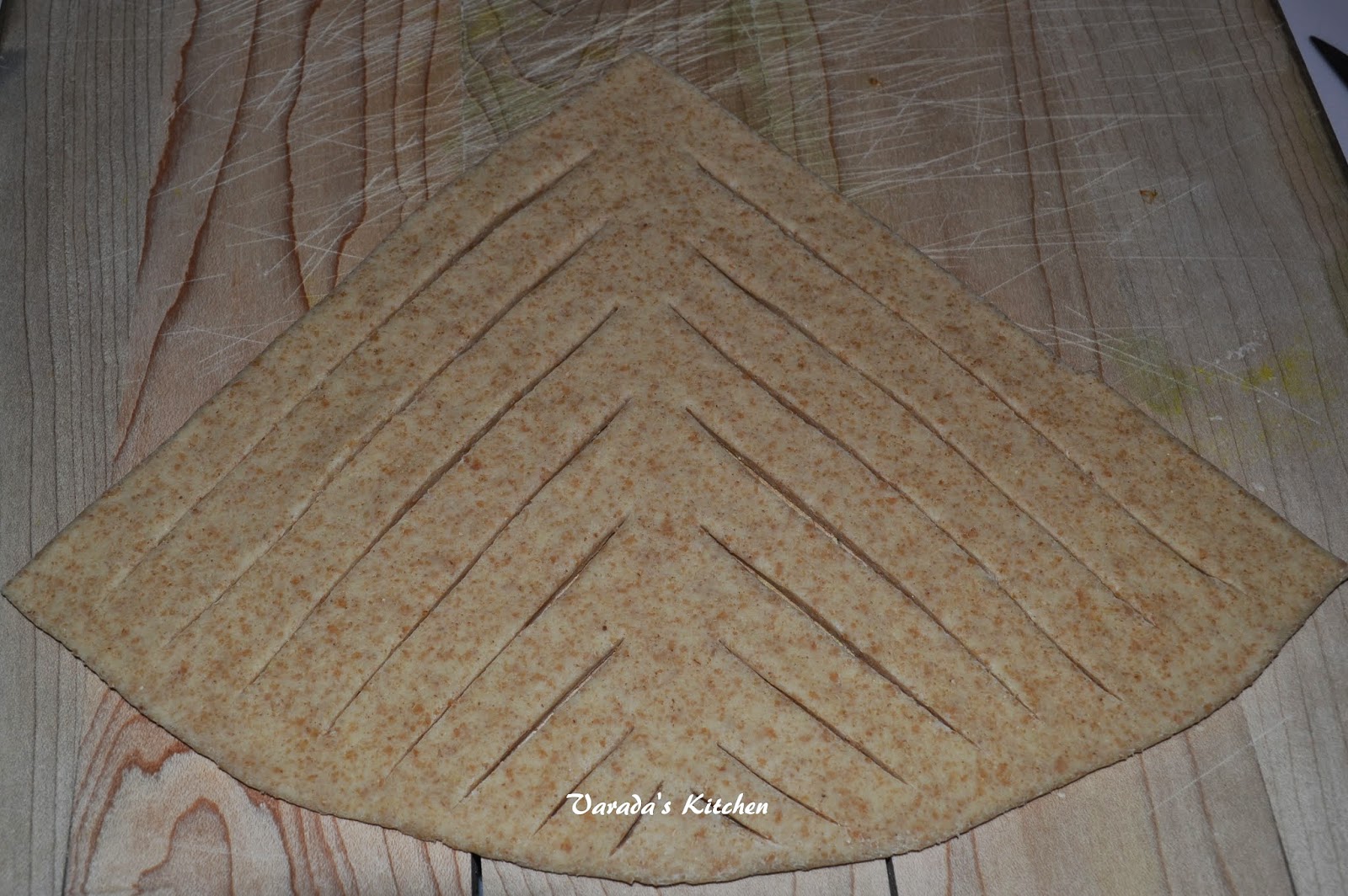 Brush the top with the herb oil. 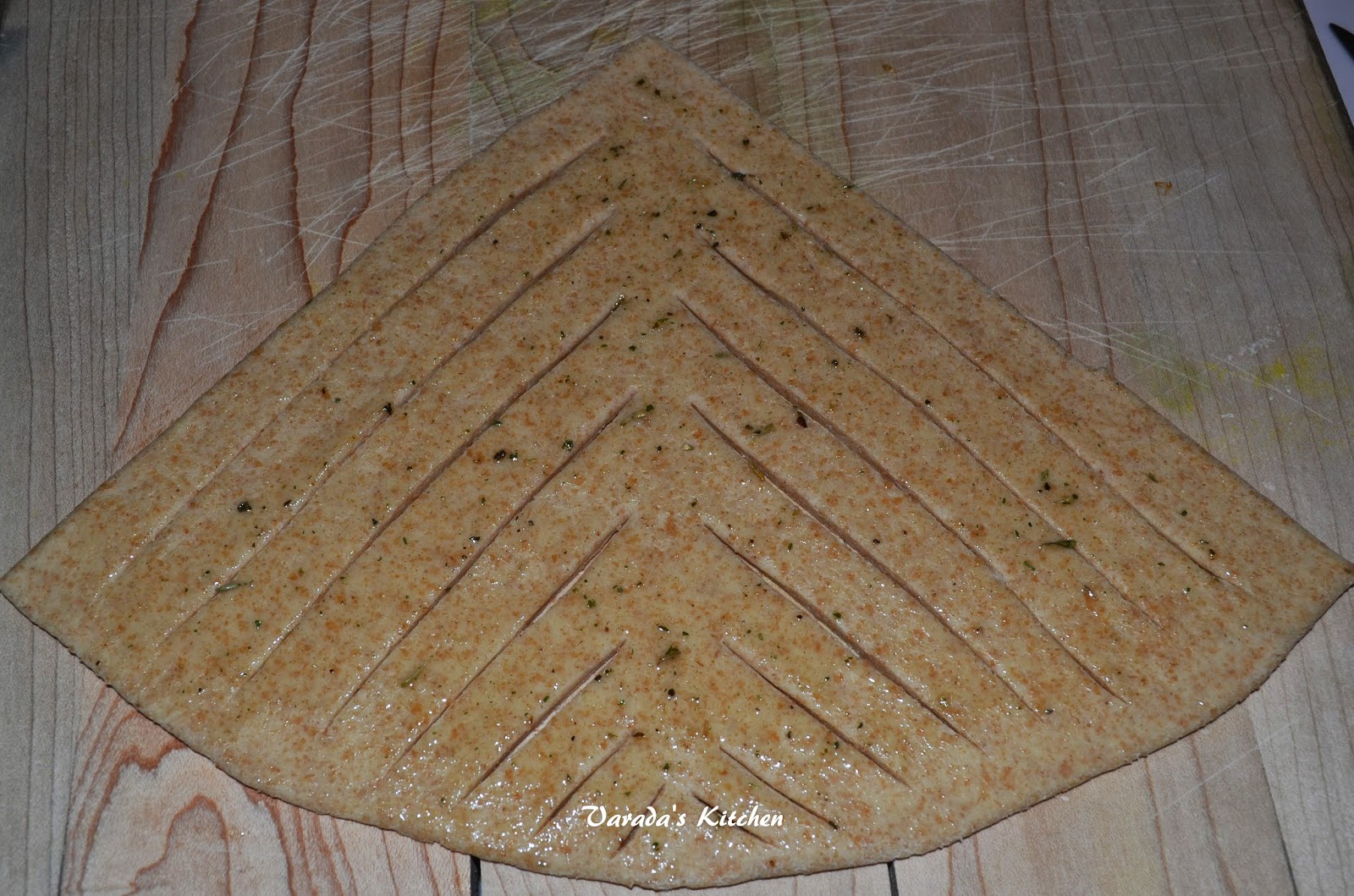 Place some of the filling in the center. 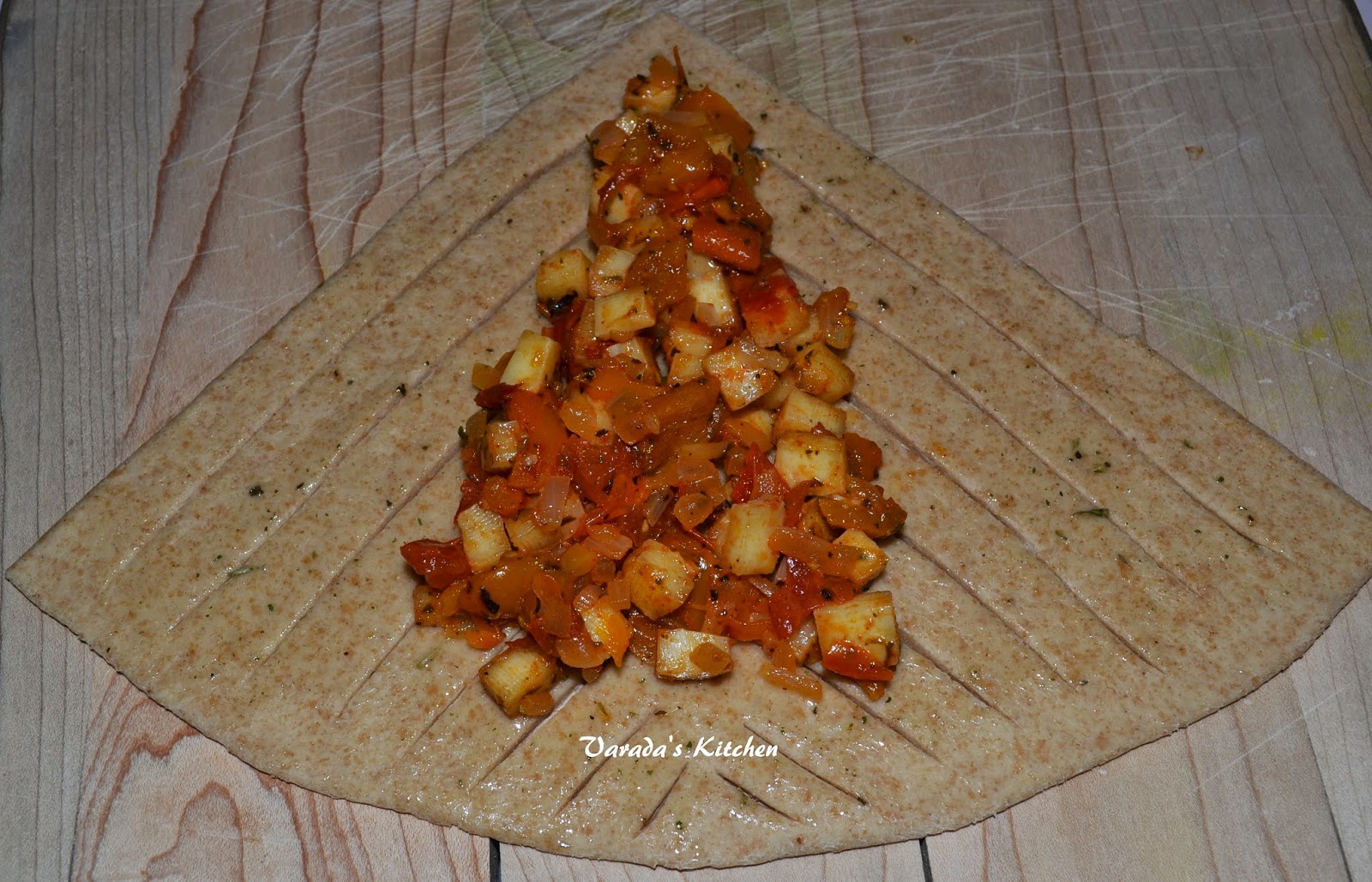 Fold the sides over the filling first from the right and then from the left. 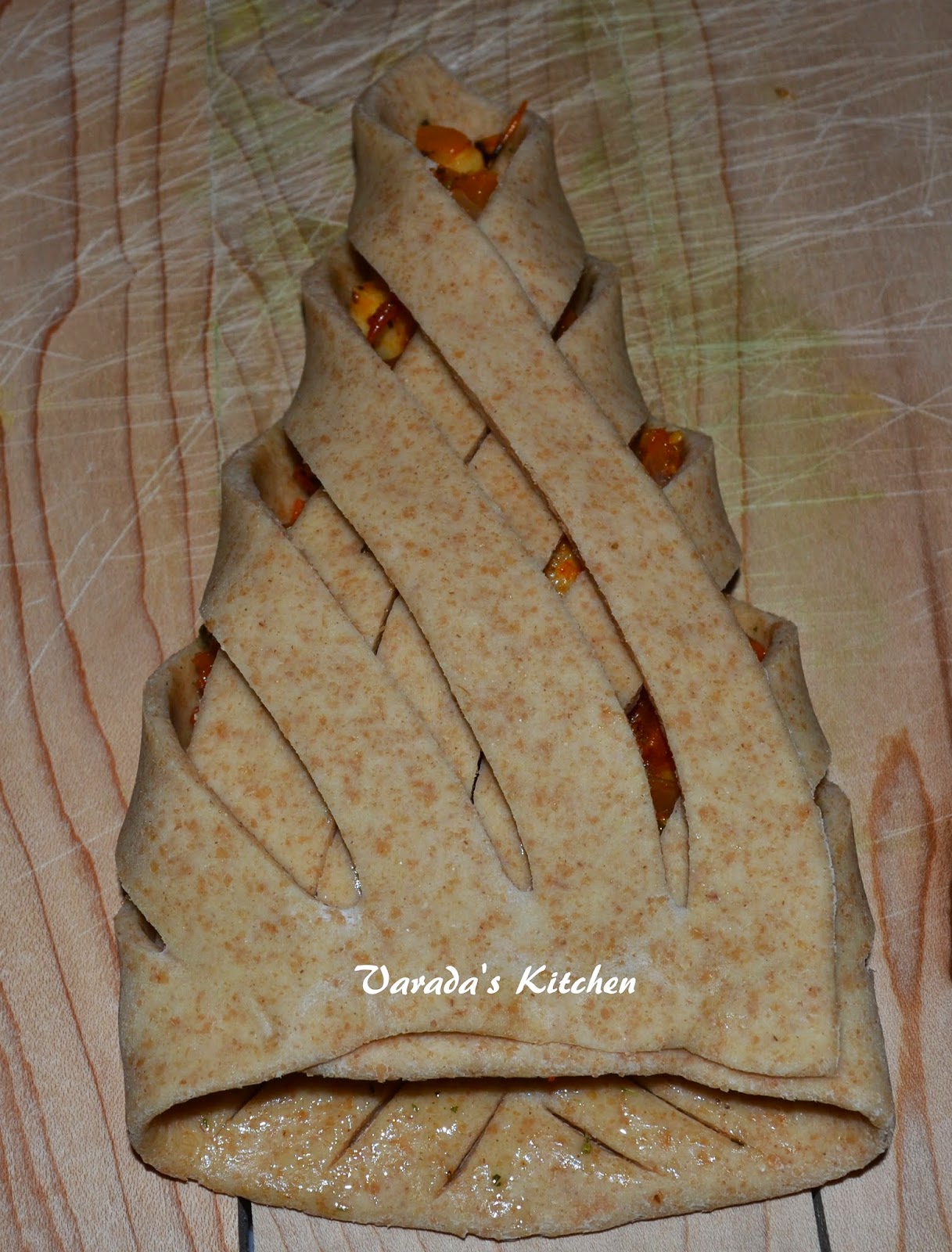 Fold in the bottom layer and seal with the top. Transfer to a baking sheet covered with parchment paper. Repeat for the other quarters. Then repeat for the second portion of dough. Brush the top with the remaining herb oil. 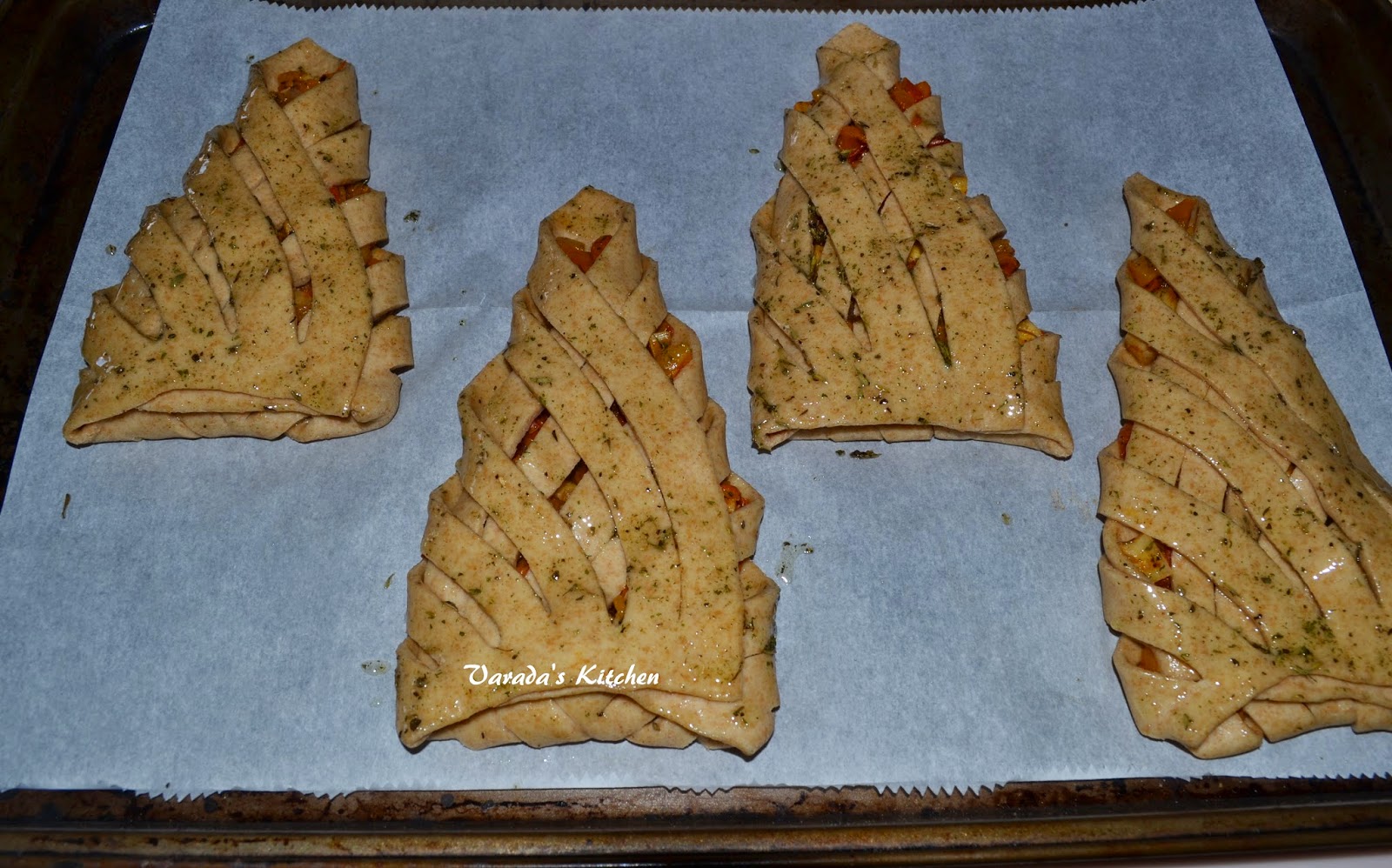 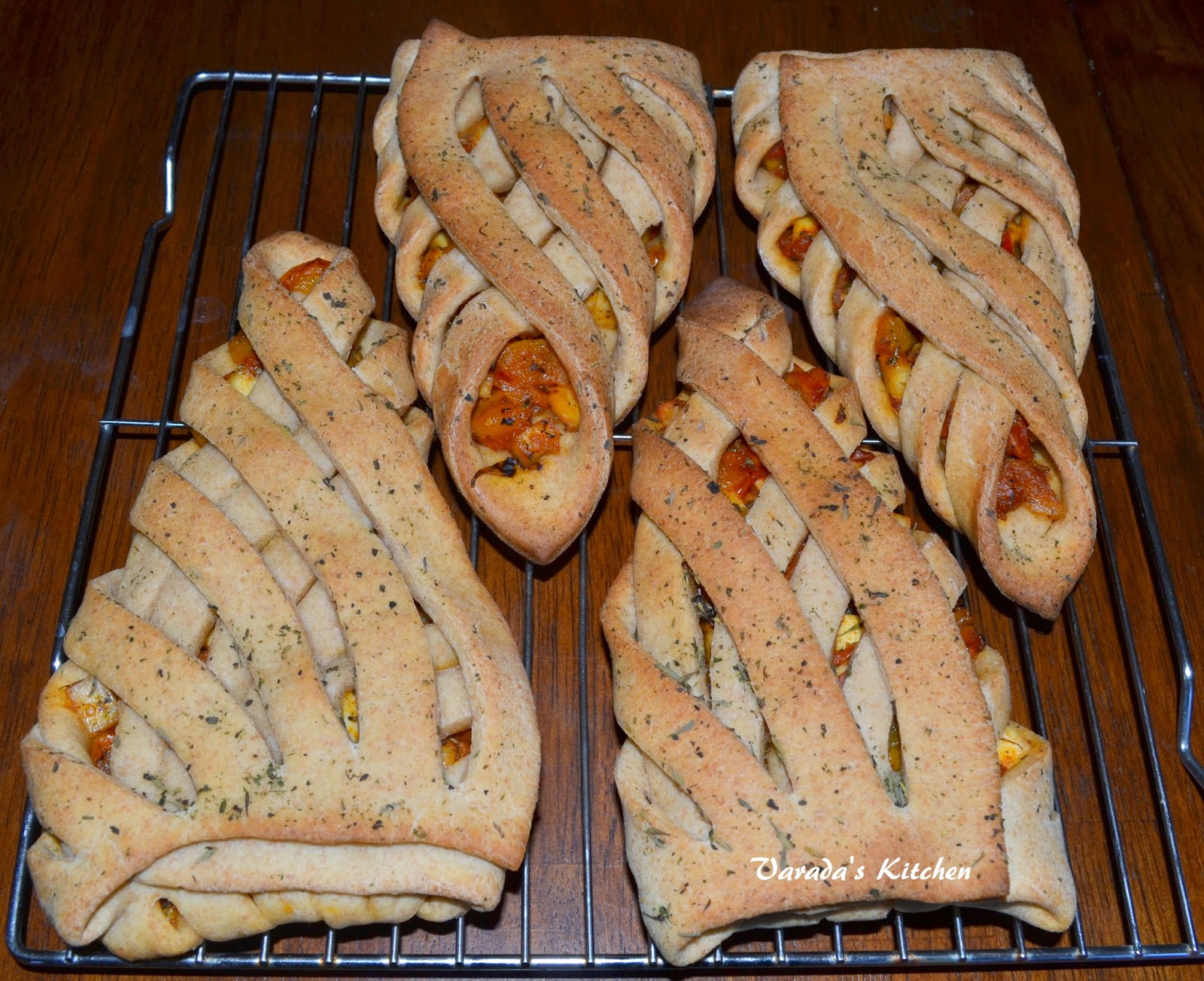 The bread tastes best when hot out of the oven. 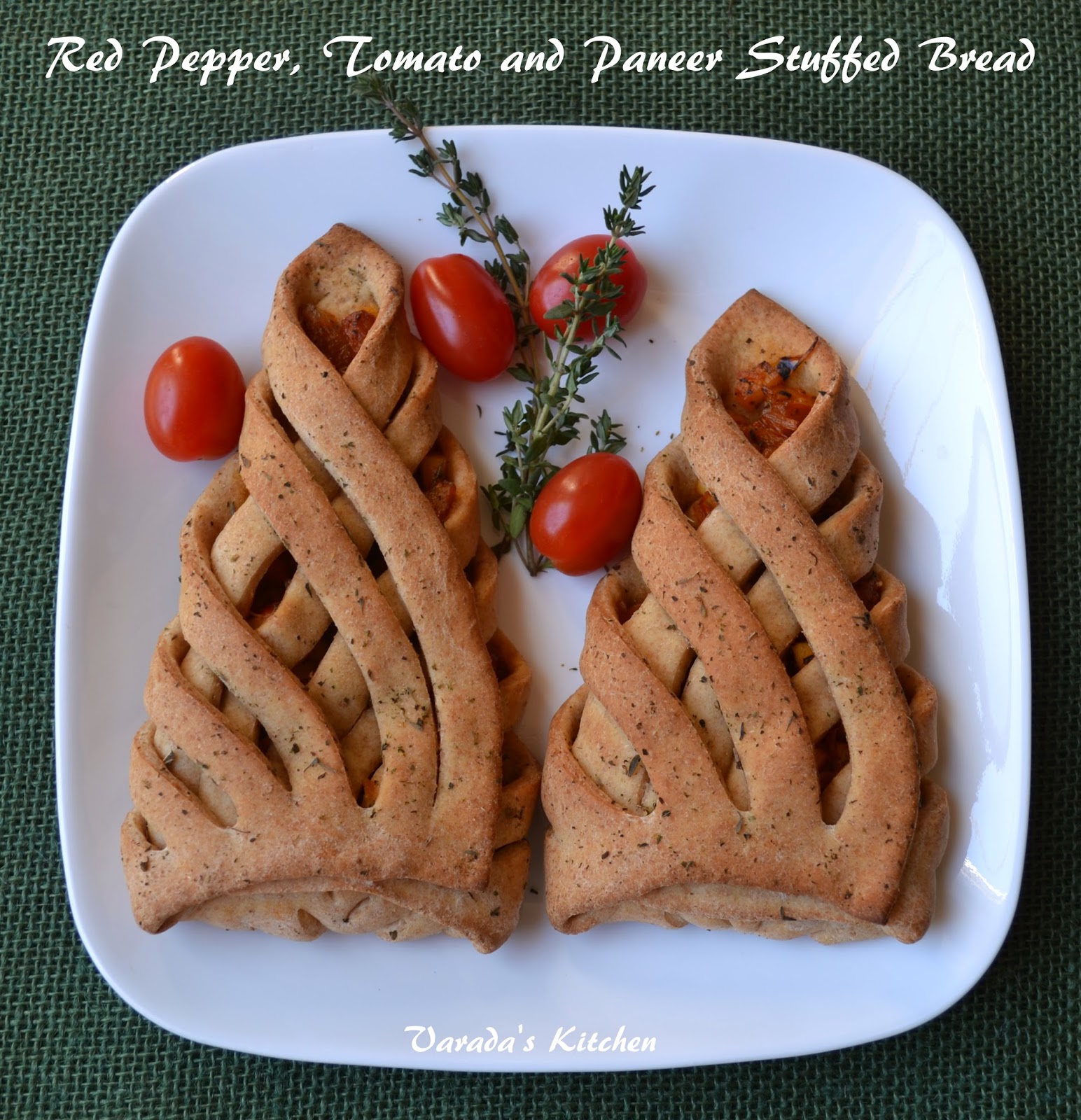