Apple, cinnamon and brown sugar are flavors that remind us of fall. I made this bread a few months back with fresh Gala apples. You can any apple for this recipe. When I baked it I referred to it as bread but as I sit down to write this post I have to say 'bite' is a more appropriate description. The dough is rolled fairly thin so there is not much in each portion. 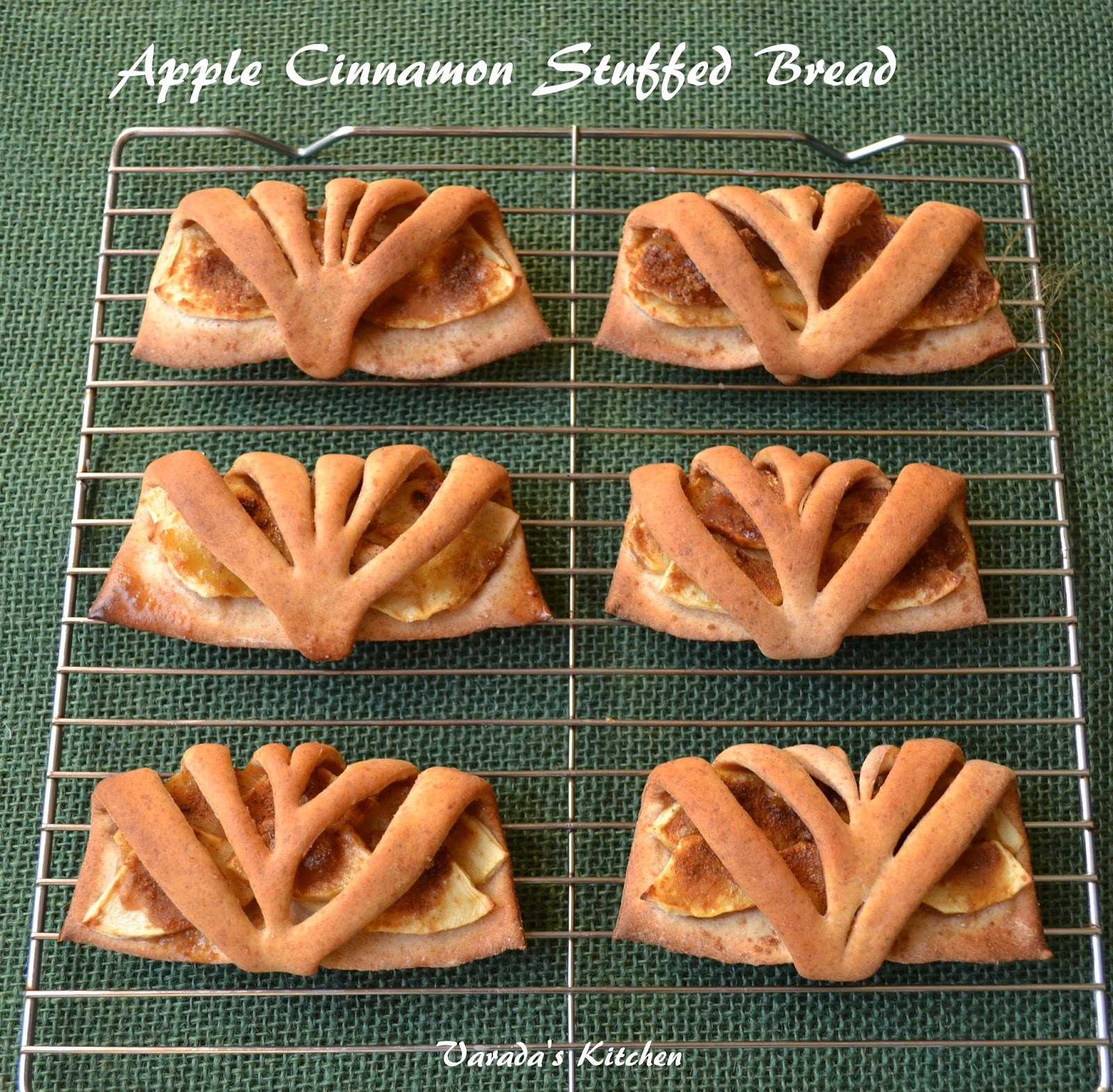 This was a picture I saw on pinterest. I decided to use fall flavors inside. The folded dough provides just enough shield from the heat to not burn the apple and brown sugar but enough to caramelize it. You should adjust sugar to your taste. It makes a light snack perfect on afternoons after a heavy lunch. Or when you want something to munch on while you are buried in a book.

I sliced the apples thin for a crunchy snack. Cut the apple slices thicker if you want it to be chewy.

Combine all the ingredients in a mixing bowl and form into a soft dough. Knead until elastic and smooth. Cover and keep aside until the dough doubles in volume, about an hour and a half. Just before the dough is ready, peel and slice the apple. In a small bowl combine the cinnamon and sugar.

Preheat the oven to 400 F. Transfer the dough to a flat working surface and divide it into two. Save one portion and roll the other into a flat disc. Cut into 6 portions. 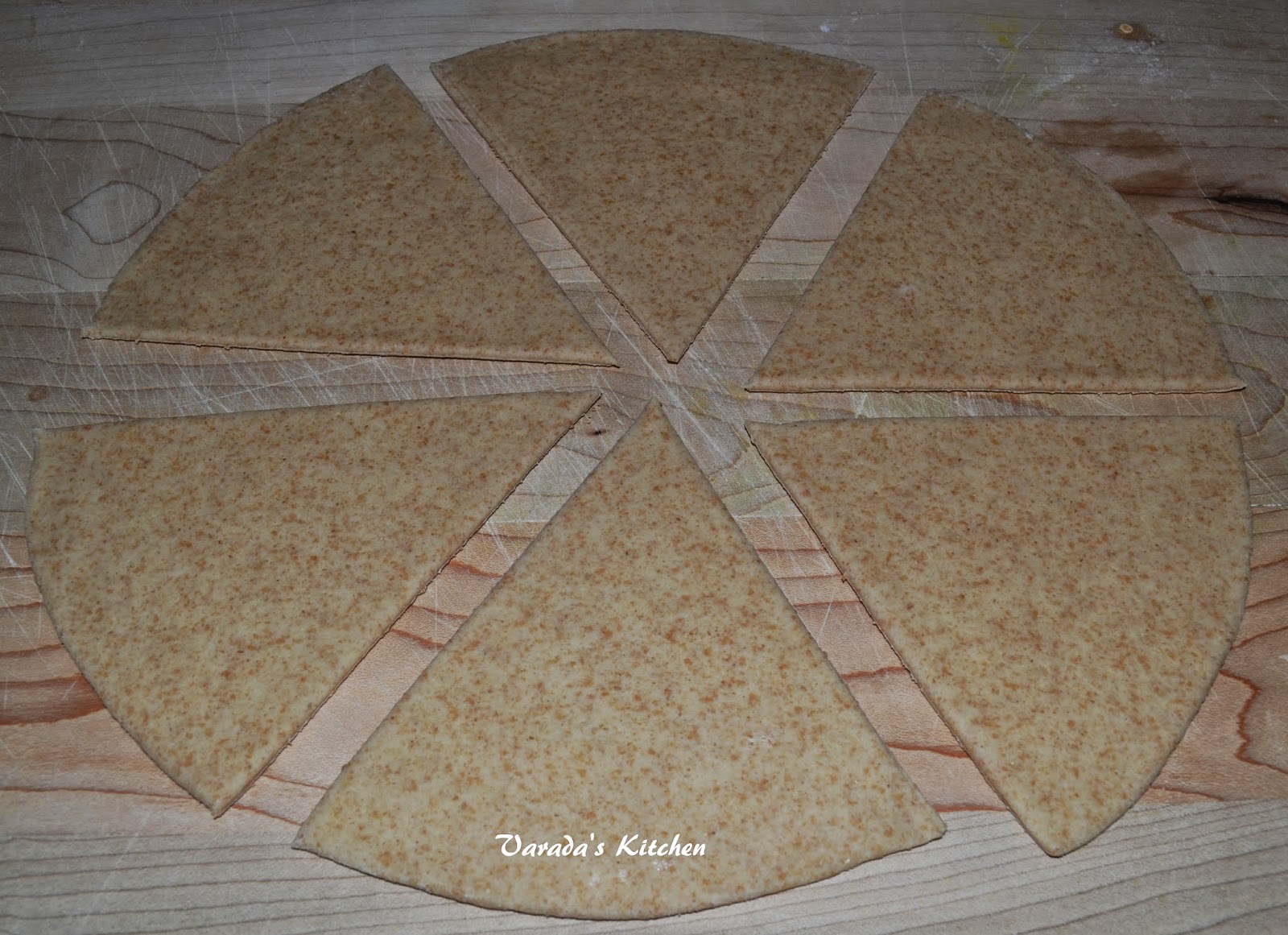 Using a sharp knife slice the center of each portion as shown below. Then place a few slices of apple on the bottom half of each triangle. 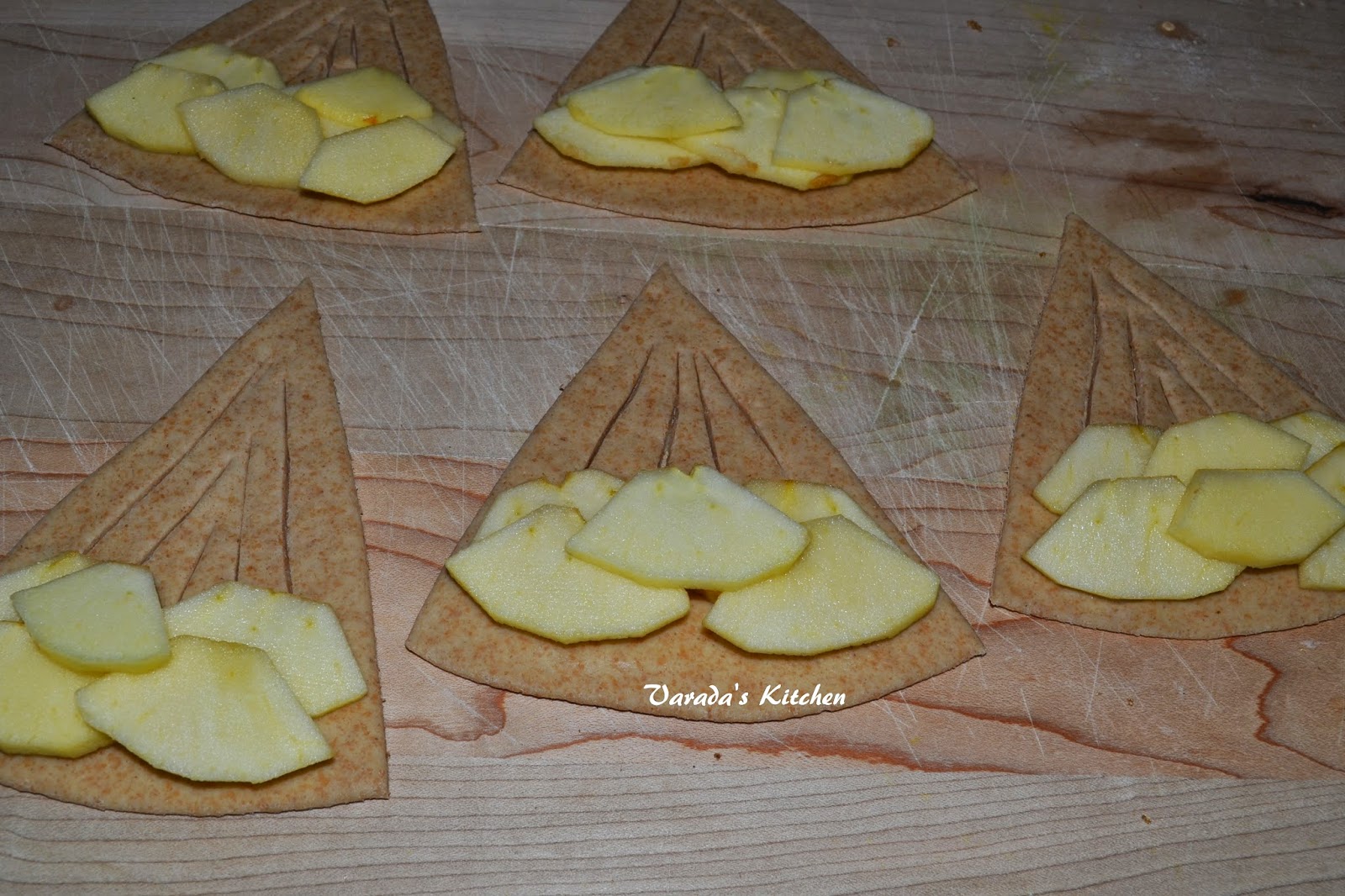 Sprinkle some cinnamon sugar over the apples. 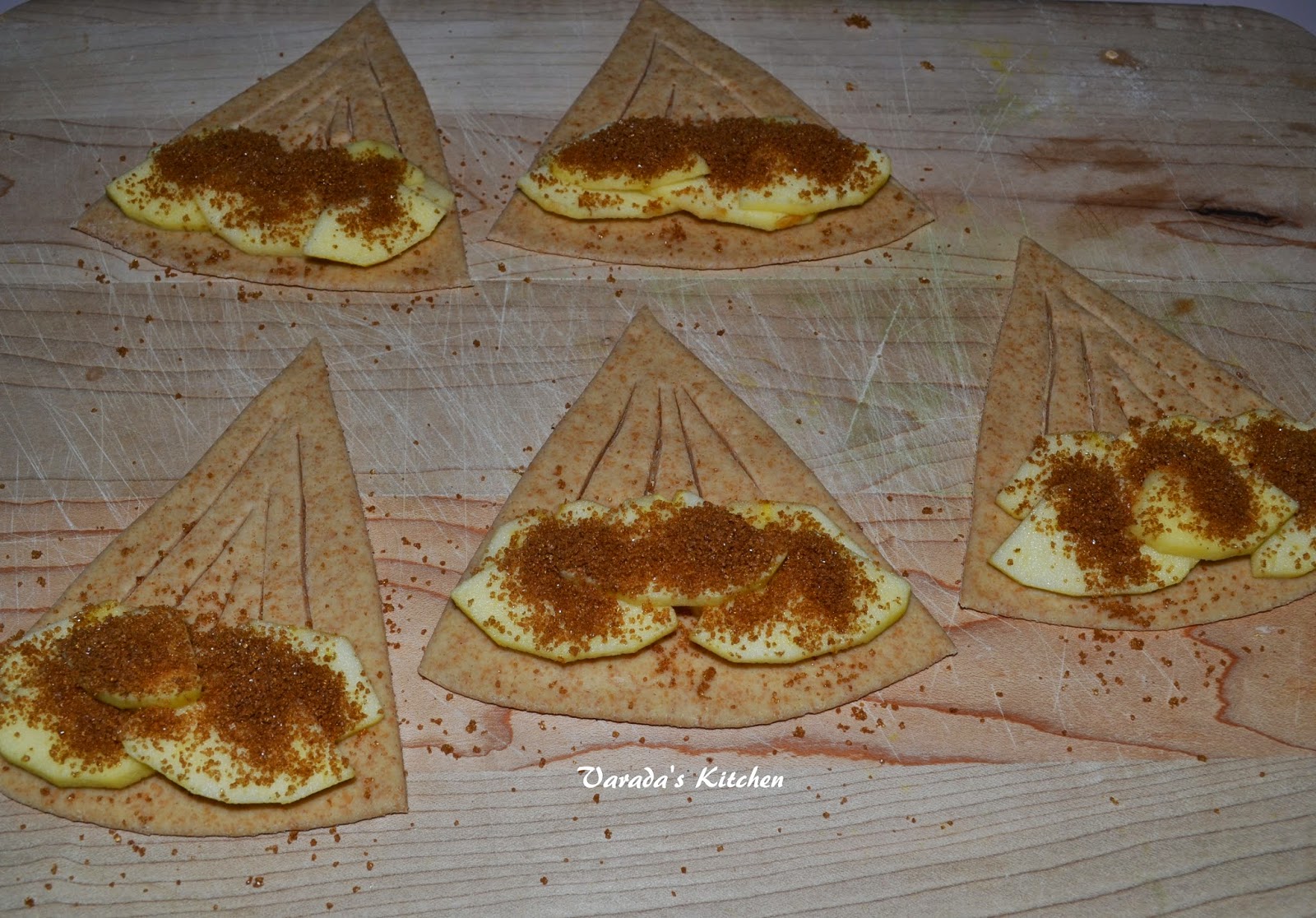 Fold the top of the triangle over the bottom and let it extend out a little. 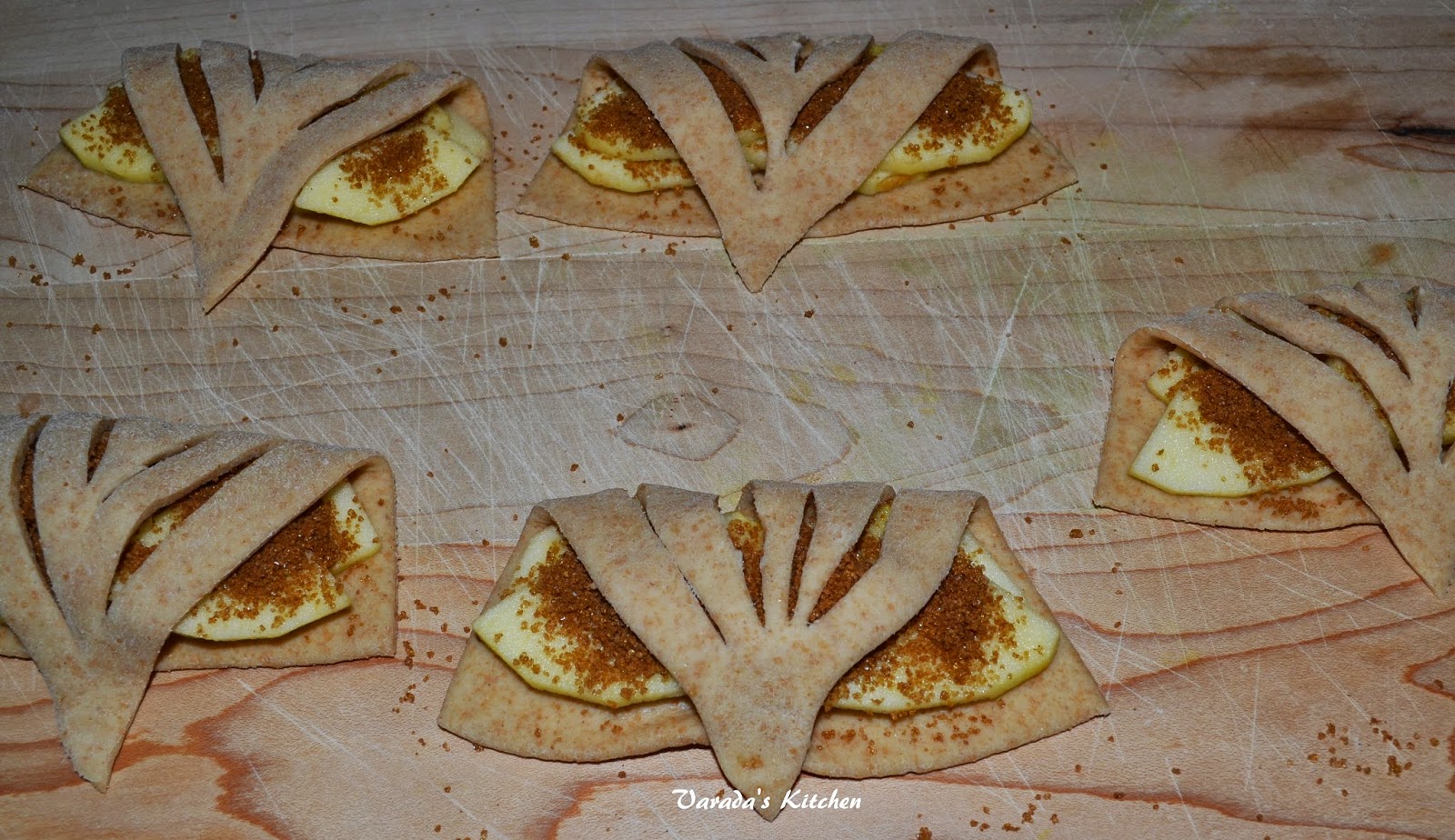 Tuck this extension under and transfer to a baking sheet covered with parchment paper. Bake for 15-18 minutes or until the top is brown. If desired brush the tops of the hot bread with butter. Repeat for the saved portion of dough.