I love to play with dough and create different shapes. Some of them are authentic recipes made for centuries and the others are my crazy ideas. This one was inspired by a picture I saw on Pinterest. I used a simple filling of mixed vegetables and used whole wheat bread for the dough. The lattice pattern was what I was after. It was an entertaining half hour and the result was tasty dinner. 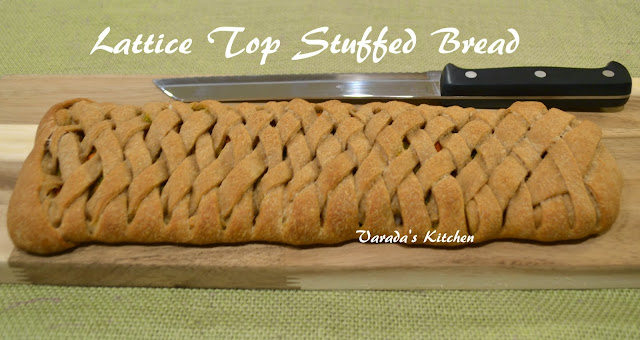 I made this bread a while back but never got around to posting it. Soon after I made it my daughter announced she was done with stuffed bread and could I not make it again. Without my most ardent fan I had to stop my experiments. Now several months later she said I never make stuffed bread anymore. And so once again I am back to my crazy shapes. Her reaction may be the result of eating dorm food. That food is known to make home cooked food taste a lot better. But I am not asking, as long as she is willing to eat it, I am willing to make it.

For the filling
2 medium potatoes
1 large carrot
1 tbsp. olive oil
a few springs cilantro
salt and black pepper to taste
spices of your choice (I used a tsp. each oregano and basil)

In a large bowl add all the dry ingredients followed by the wet ingredients and combine to form a soft, tacky dough. Knead for about 5 minutes or until the dough is soft and shiny. Cover the bowl with cling wrap and leave aside for an hour to let it rise.

While the dough is rising, peel the potatoes and carrot. Dice into small cubes. Heat the oil in a pan and add the vegetables. Saute until tender. Add the remaining ingredients, turn off heat and allow it to cool completely.

When the dough rises to twice its volume transfer it to a flat floured surface. Using a rolling pin roll the dough into a large rectangle. Leaving a good 5 inches in the middle cut the sides into strips as show in the picture below. The strips should be attached to the center. Now place the cooled filling in the center of the rolled dough. 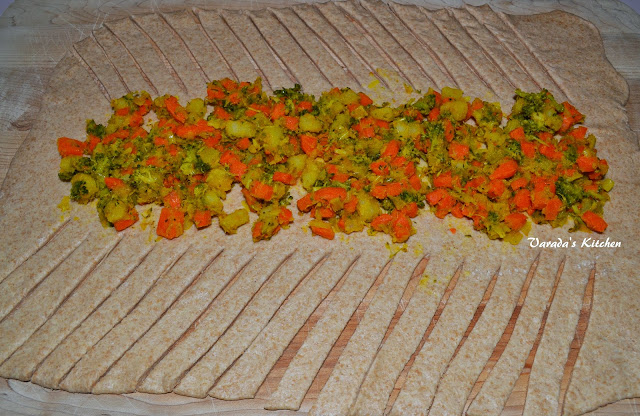 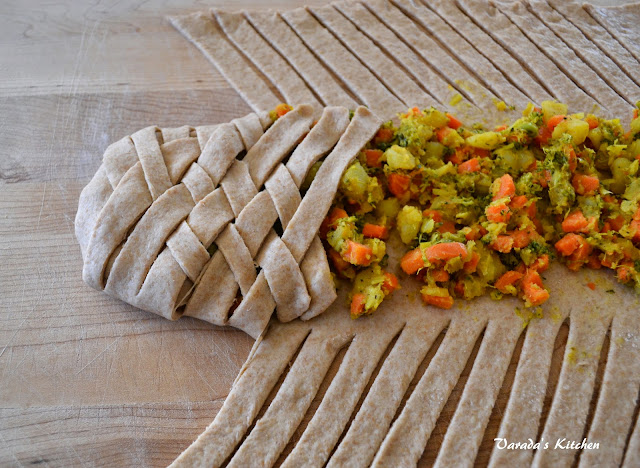 Continue folding the strips until you reach the end. Finally tuck in the end piece under the last couple strips. If you did a better job of tucking in the ends you would get a better rounded edge than I did in the picture below.

Preheat the oven to 350 F. Prepare a baking sheet by placing parchment paper over the top. Transfer the finished piece to the baking sheet, brush it with a little milk/water solution and let it rest for about 10 minutes.

Bake in the preheated oven for 20-30 minutes or until the bread is cooked through.