Paneer is one of my daughter's favorites. To celebrate her return home for the summer I made paneer in masala/gravy, a simple recipe thrown together with whatever is available on the given day. That said, there is really no recipe. The basic idea is to marinate the paneer in the masala/gravy. The ingredients for the gravy I tweak based on the ingredients in the house. If I have cashews, I add some cashew paste. Today I had yogurt I needed to use up and so I mixed that in. The ingredients I use are close to those used in the classic versions but the method is nowhere close. Besides those recipes are usually spicy and unnecessarily rich. This probably works for special occasions but they are too heavy for everyday consumption in my house. 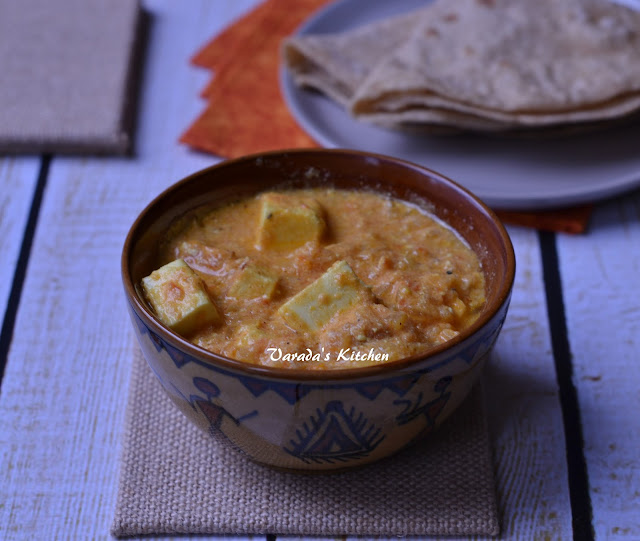 I served the paneer with some poli/chapati. My daughter enjoyed this meal thoroughly. While I was cooking I realized I have all kinds of paneer dishes on this space but for some reason I never posted paneer in gravy. So today I am posting the version I made when my daughter came home for summer.

Cut the paneer into slabs and keep aside. Heat half the oil in a pan. Place the slabs of paneer in a single layer until partially cooked. Do not brown. Flip them over and cook the other side. Take them out of the pan and drain on a paper towel.

Add the remaining oil to the same pan and cook the onions on medium low heat. While the onions cook, cut the paneer into bite size pieces and keep aside. When the onions turn translucent add the garlic, garam masala, paprika and turmeric. Saute for a few seconds. The aroma will rise from the pan. Add the tomatoes and let the masala cook. When the tomatoes are mushy add the whisked yogurt and salt to taste. Simmer but do not let it come to a boil. Add the paneer and let it cook together for a few minutes. Turn off the heat. 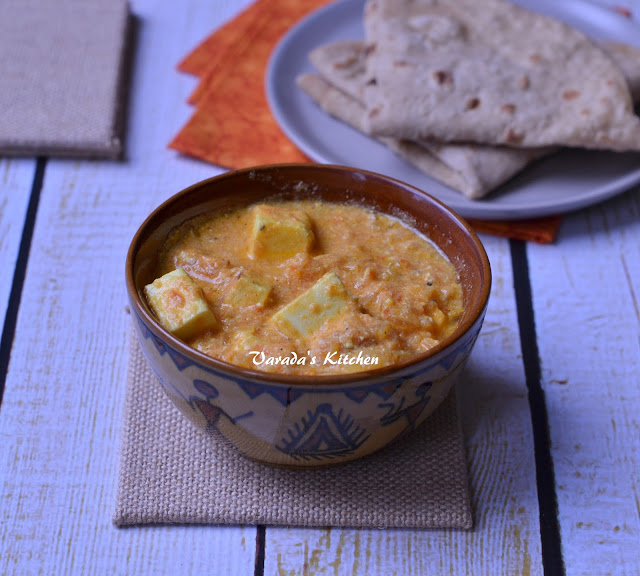