By Varada's Kitchen
Last year I was on a long break from baking. It was not intentional. With my daughter off to college there is no one at home to eat my experiments. During one of her visits from college I broke the baking drought with this Apple Challah, a recipe I have wanted to bake ever since I saw it in a Facebook baking group. 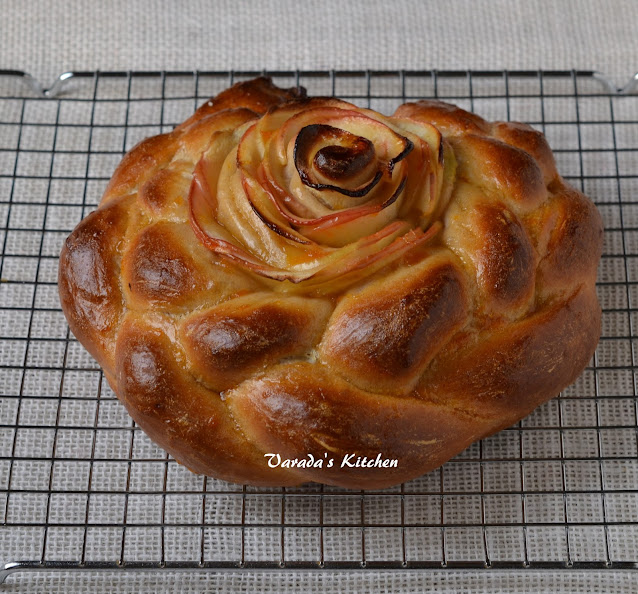 Partially cooked apples are added to challah dough to make Apple Challah. The apples with a little apricot jam add a lovely flavor to the bread. You can make the dough as rich as you want with the addition of eggs and honey. Or you can keep it simple with a water challah recipe as I did. 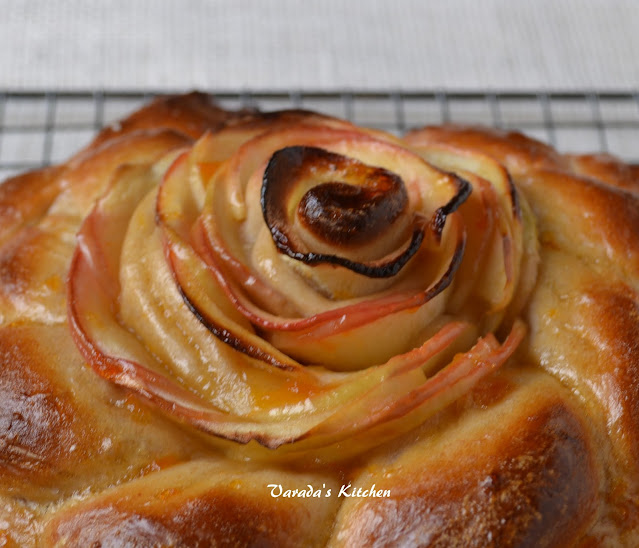 First you want to make the dough. In a bowl mix all the dry ingredients for the dough followed by the wet ingredients. Combine to form a soft sticky dough. Knead well until the dough is soft and smooth. Cover and keep aside for an hour or until it doubles in volume.

Flour a working surface and transfer the risen dough on to it. Divide into two equal portions. Keep one of them aside.

With one of the portions: divide into two such that the small part is a forth of the whole portion. Roll the larger of the two parts into a disc the width of your palm and keep aside. Divide the smaller part into two again. Roll each of the parts into a long rope about 8 inches. Using a roller flatten the rope. Repeat with the second rope.

Brush half the apricot mixture on one of the flattened ropes. Place the apple slices on it and sprinkle with cinnamon powder.

Fold the lower half of the dough over the apple slices.

Starting from one side roll the dough and apple to form a flower. Secure with a toothpick if needed and let it stand. Repeat with the other flattened rope. Starting where you left off roll the second rope and apples around the first to form a large flower. Place this on the center of the disc and keep aside. 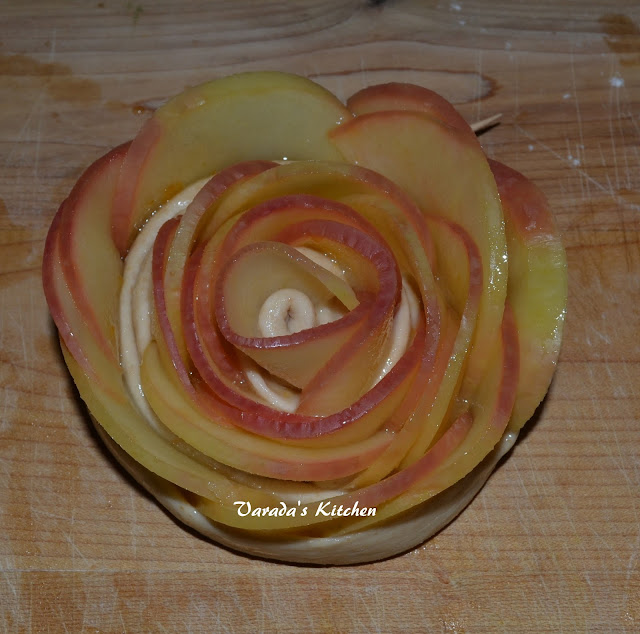 Now work with half portion of dough you had put aside. Divide it into 3 portions and roll each into a long rope of about 10-12 inches. Pinch one end of all three strands together. Braid the 3 strands like you would braid hair. Do not pull on the ropes or braid too tight. When done place the rope around the apple flower on the dough disc. Secure the ends by tucking one end under the other. 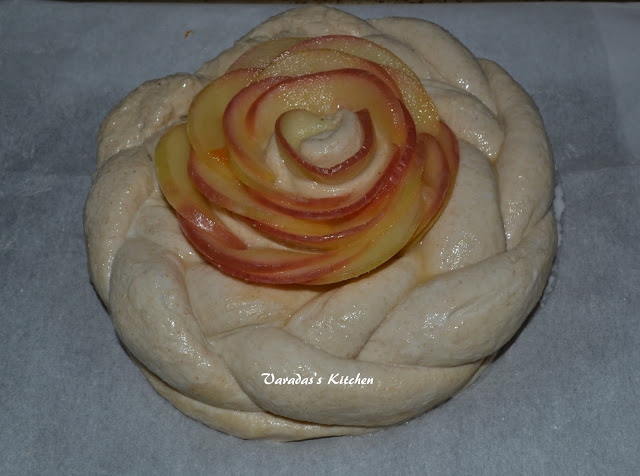 In a small bowl mix the cornstarch with water and brush on the bread. Keep aside for 20-30 minutes.

Preheat oven to 375 F while the bread proofs. Bake for 35 minutes or until the bread is golden brown. In a small bowl mix the apricot jam for the glaze with a 1 tsp of water. Remove bread from the oven and brush with the apricot mixture. Return to the oven for 5 more minutes to allow the bread to turn a deep golden brown.

Remove from oven an let it cool. Enjoy!