I have always loved baking but I particularly like baking bread. After baking a whole array of breads using commercial yeast I decided to make my own levain or sourdough starter. I started Bubbles (as she was called) a couple months ago. She was active and bubbling for about 2 weeks and I was able to bake soda bread and Baguettes with her. But then she started smelling like nail polish and had to go. 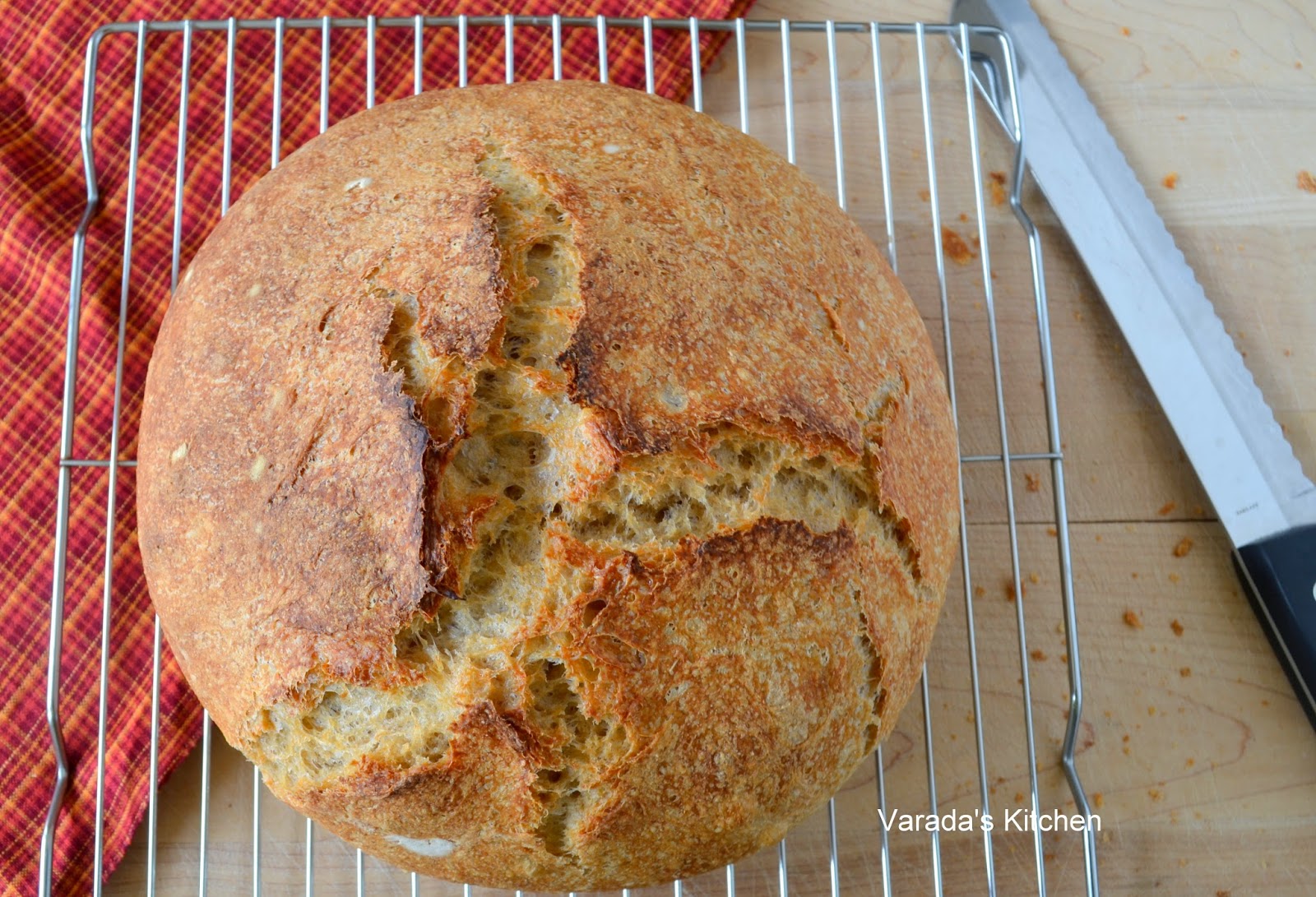 That was when I realized I needed information about how a sourdough starter worked before I could start a new one. I found a Facebook group Artisan Bakers and that changed everything. People in that group were baking the kind of bread I had drooled over. True artisan bread loaves! I started gathering information. I bought Ken Forkish's Flour Water Salt Yeast on my Kindle app and read it end to end. It has a lot of information about bread making with commercial yeast and homemade starters. I would highly recommend it to anyone venturing into this area. 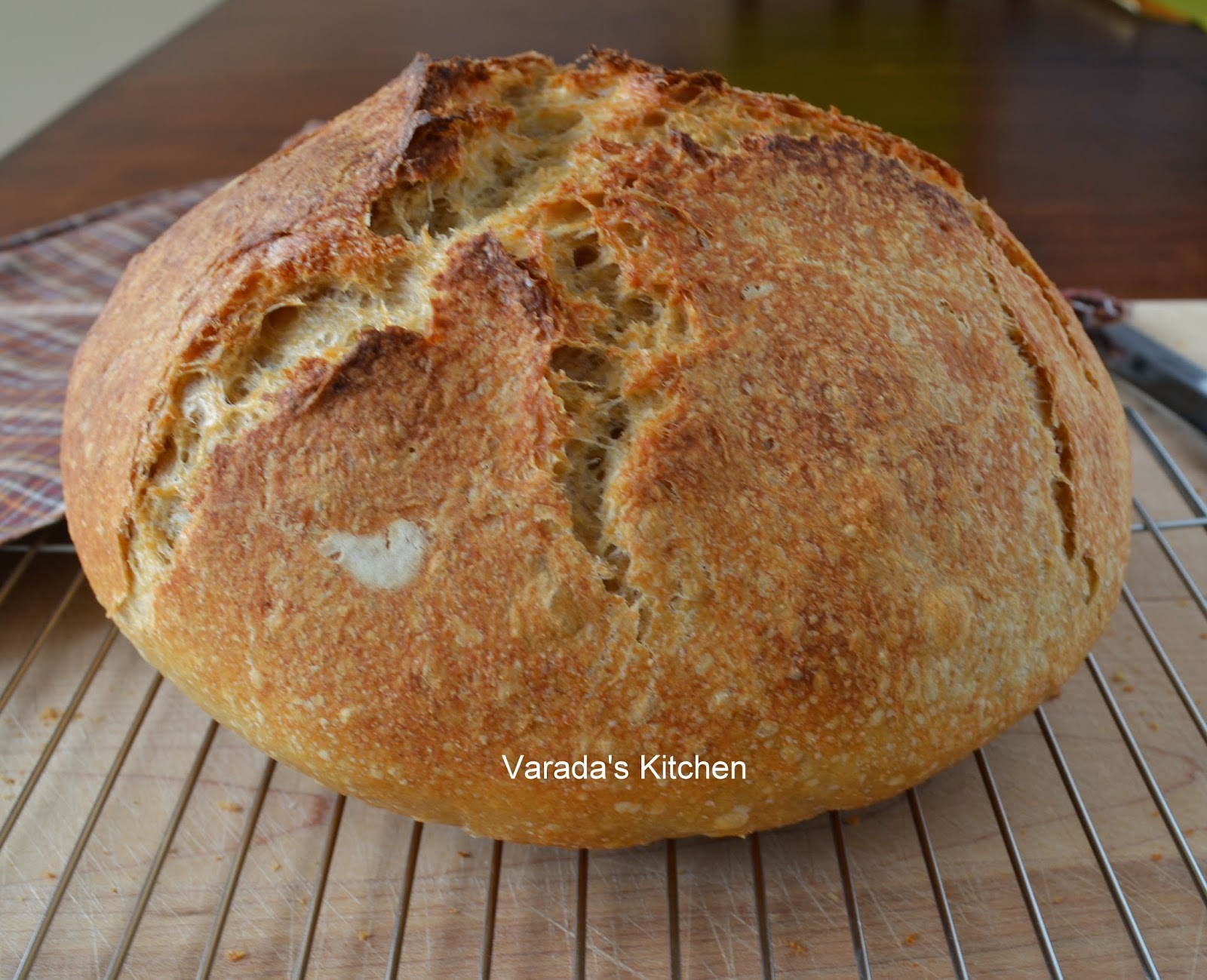 I started Bubbles II based on instructions in the book. I use King Arthur Flour for baking. After baking a few breads from the book on a baking sheet I invested in a couple of toys, a dutch oven and a pastry blender. Forkish breads in the book are all baked in a dutch oven. This is my first attempt at baking bread in one. 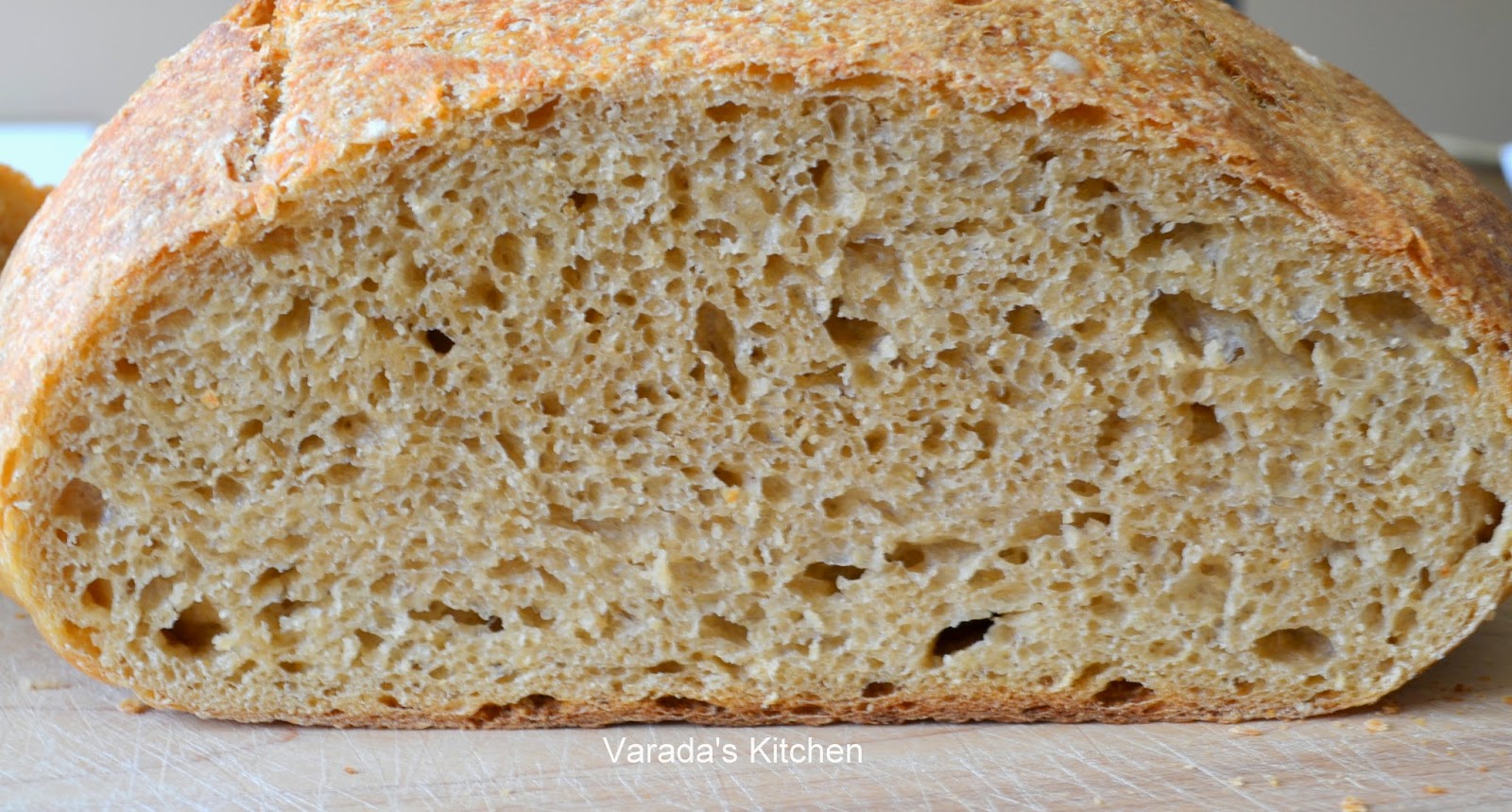 I started my baking cycle on Friday morning. Here is more information about feeding and maintaining your starter if you are interested.

On Saturday morning I fed the starter around 7 am and we all had sourdough pancakes for breakfast with the discarded or spent starter. I kept aside the fed starter for 6 hours. 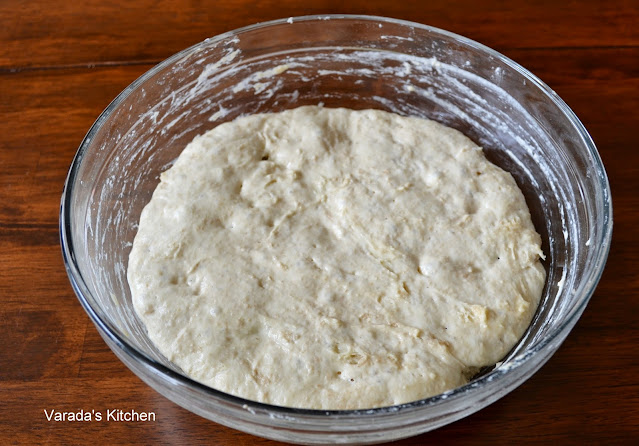 After 6 hours I mixed the flour and water with the starter. 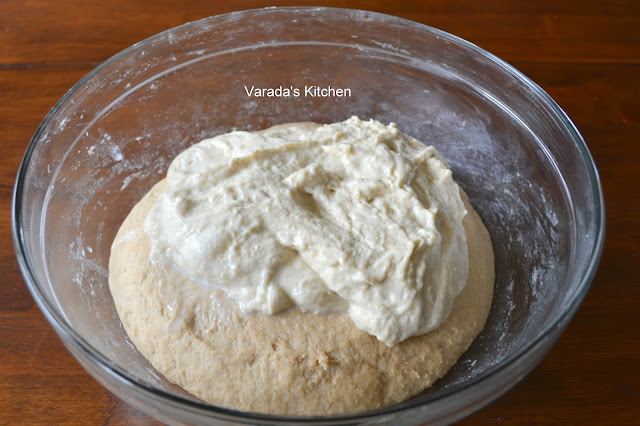 As per my baking plan I have about 100 gm of starter left over and that goes into the refrigerator until the next baking cycle starts on Friday. 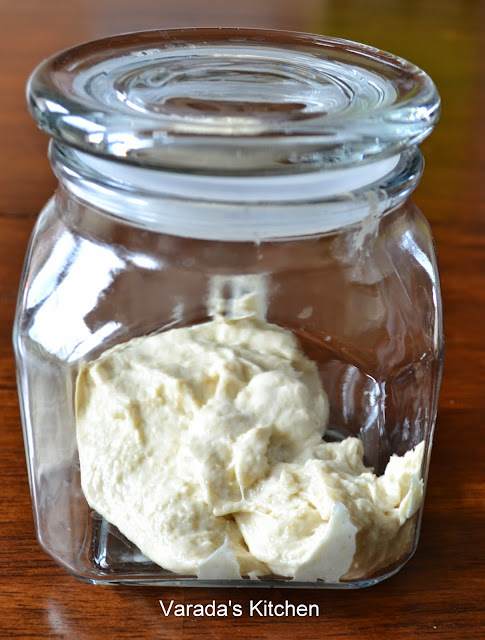 Since this recipe is a Hybrid bread it uses a scant 1/8 tsp. of commercial yeast. I added the yeast along with salt to the bowl with the flour, water and levain and made a sticky dough from it. By this time it was 4 pm. I let the dough rest covered for 5 hours on the kitchen counter. 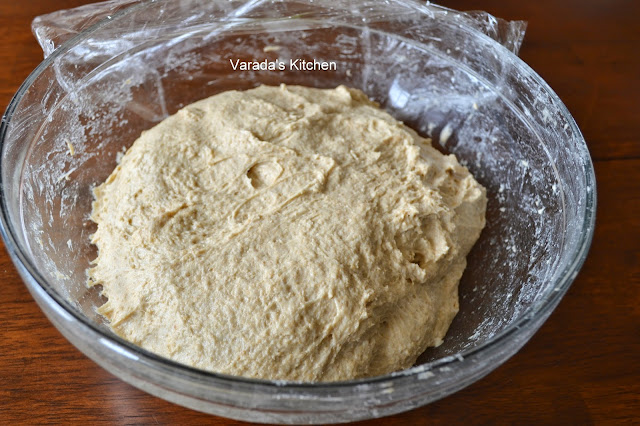 During the first hour I uncovered and folded the dough a couple times. Folding strengthens the dough. 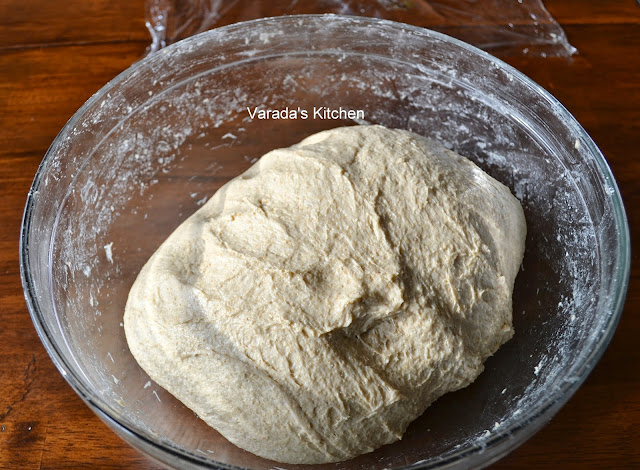 By 9 pm after 5 hours the dough had risen to more than double the volume. 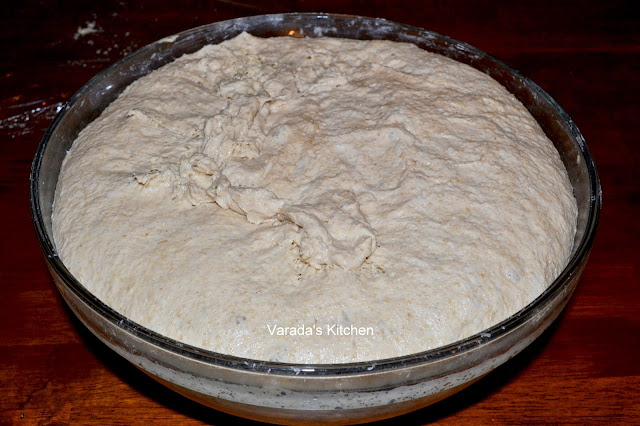 I transferred the dough to a floured board to be divided and shaped. I placed the shaped dough seam side down in a floured dry bowl, covered it and put it in the refrigerator overnight. I would love a Benetton or a cane proofing basket but that will have to wait. I do not like to buy too many toys at once. 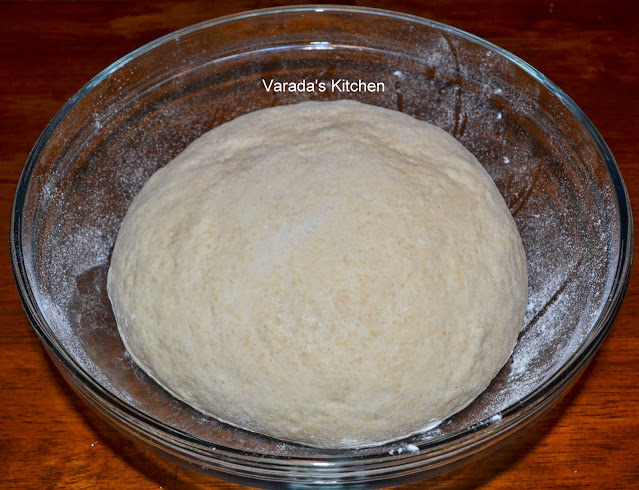 On Sunday morning about 12 hours after the bowl went into the refrigerator I set the oven to preheat to 450 F with the lidded dutch oven inside. 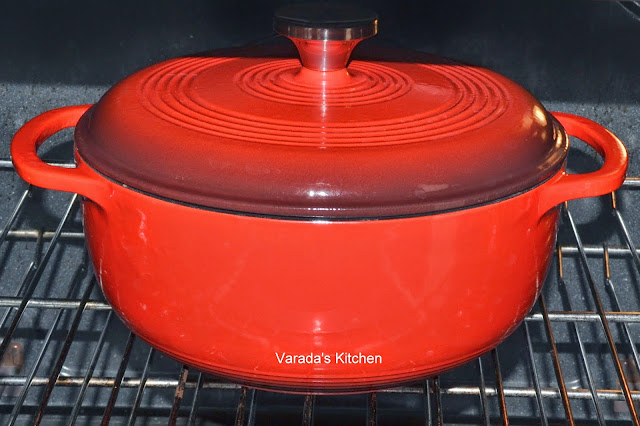 When the oven was hot I removed the dutch oven and placed a parchment paper on the bottom. Next I took out the shaped dough from the refrigerator. 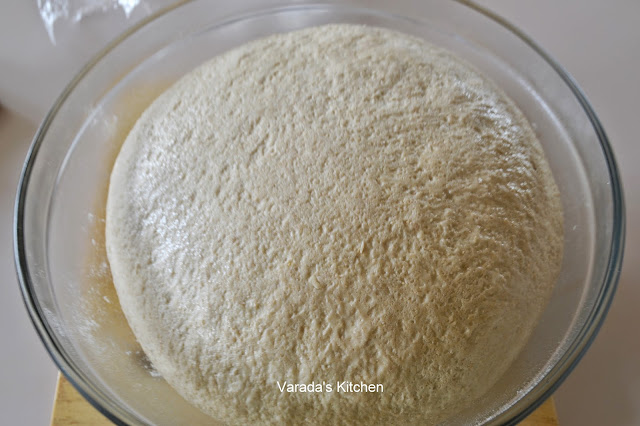 I inverted it and placed it seam side up in the hot dutch oven. 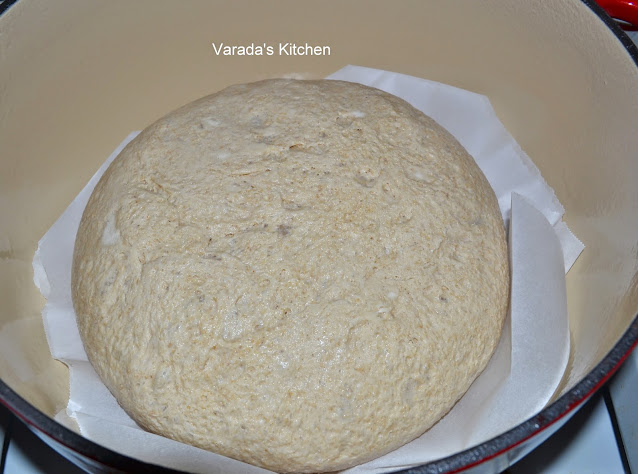 I replaced the lid and returned the dutch oven to the middle rack of the oven. I let it bake for 25 minutes with the lid on. Then I removed the lid and let it bake uncovered for another 15 minutes. When done I slid the bread out to a cooling rack. Inverting the shaped bread puts the seam side up. As the gas build in the bread the seam is ripped open. 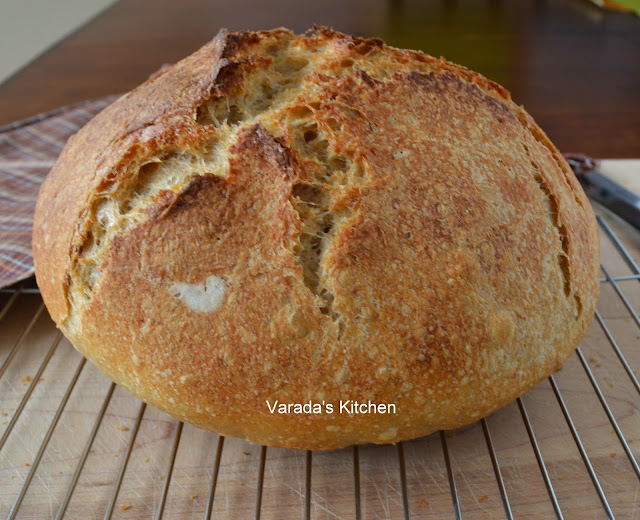 This bread has a crispy crust but the crust is so thin that it is never hard to chew. The bread is very soft and very flavorful. I do not believe I could go back to a regular loaf of bread. The ultimate goal is to retain the gas in the dough during the shaping to ensure an open crumb. I got a fairly even crumb but not as open as I would have liked. I am working on getting that right. 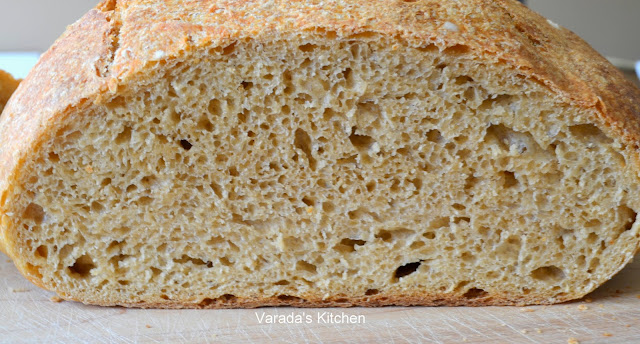 This bread is great for sandwiches. For the exact recipe refer to the book Flour Water Salt Yeast by Ken Forkish. 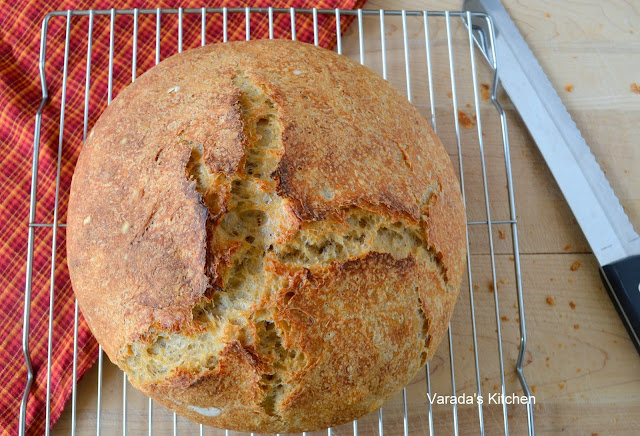