This month for the group We Knead to Bake we baked this petit pain au lait. The recipe provided used commercial yeast but I wanted to use my wild yeast starter. So I converted the recipe to accommodate the starter. Look here for help converting your recipe. The slow fermentation allowed the flavors to develop. The end result was a lovely flavorful bread, light and delicious. 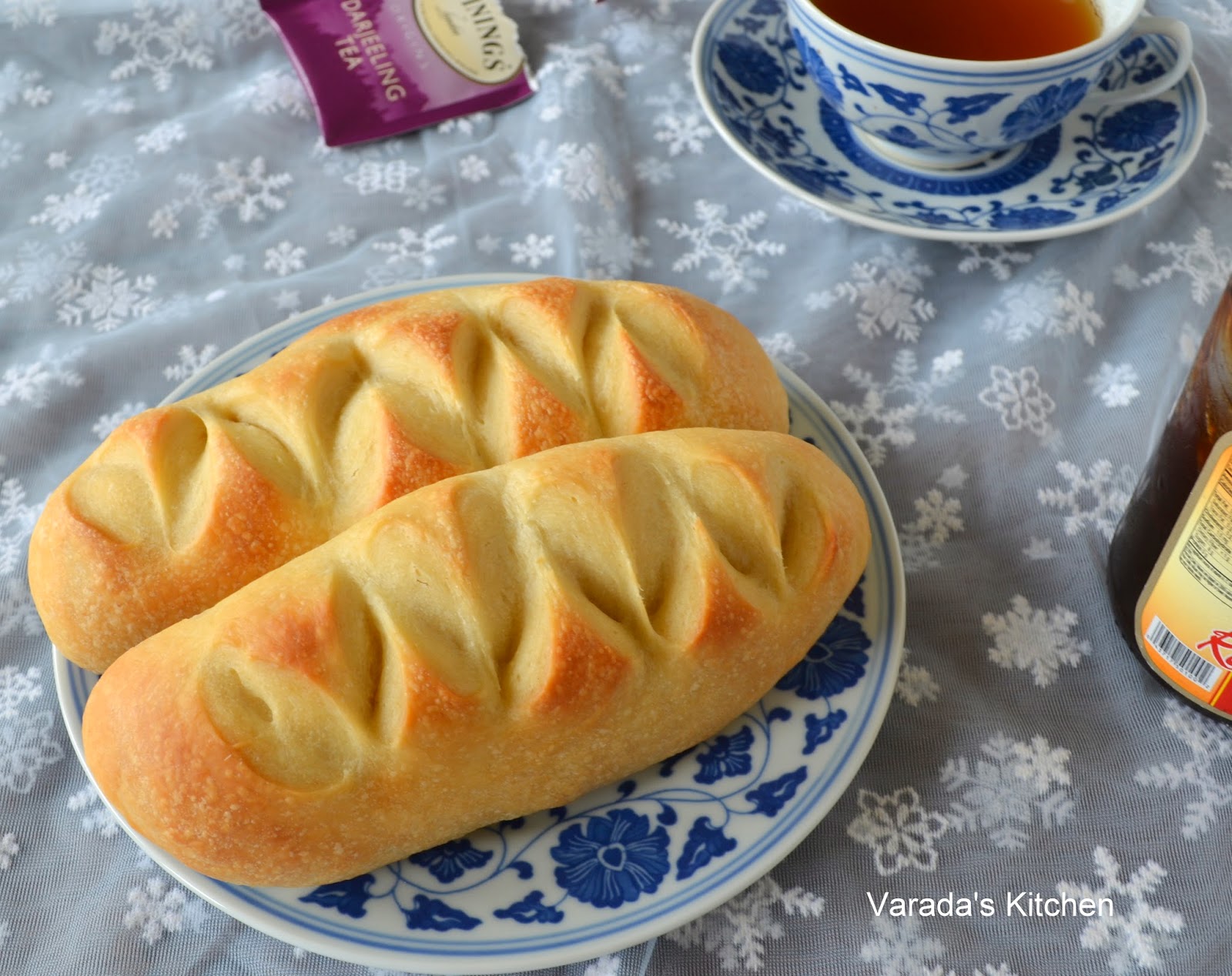 The first thing I did was to find the weight measure equivalent of the provided recipe. Luckily for me the link provided in the recipe had the link to the original recipe that used weight measure. Once I had that I used basic rules to do the conversion. The proportion of starter I added was 40% of the total flour. Based on the total grams of starter I then calculated the grams of flour and water in the stater. I subtracted these amounts from the flour and liquid (in this case milk) amounts in the recipe. This resulted in a dough with texture that was similar to that expected from the original recipe.

Wide yeast takes a lot longer to develop and does well with plenty of time. So the next change I made was the way the dough was kneaded or not kneaded. I have learnt from my experience with wild yeast that the texture of the final product is best when the dough is folded as opposed to being kneaded. As such I applied 3 folds within an hour of forming the dough. I then left it to rise for about 4 hours bringing the total bulk fermentation time to 5 hours. I then shaped the bread, scored the top and let it proof overnight in the refrigerator. This allowed the flavors to develop and the gas to build even though the dough itself did not rise much.

Next morning I let the bread rest on the kitchen counter for about 10 minutes before I put it in the oven. I baked the bread as per the recipe at 400 F for 12-15 minutes. I got great oven spring and the bread puffed up to 3 times in volume. I am thrilled with the result and will definitely try this bread again.

In a mixing bowl combine the starter with the milk. Mix in the egg and sugar. Sift the flours and add them to the mixture. Form a sticky dough. Now work in the butter a little at a time until it is well combined. Cover and keep aside. 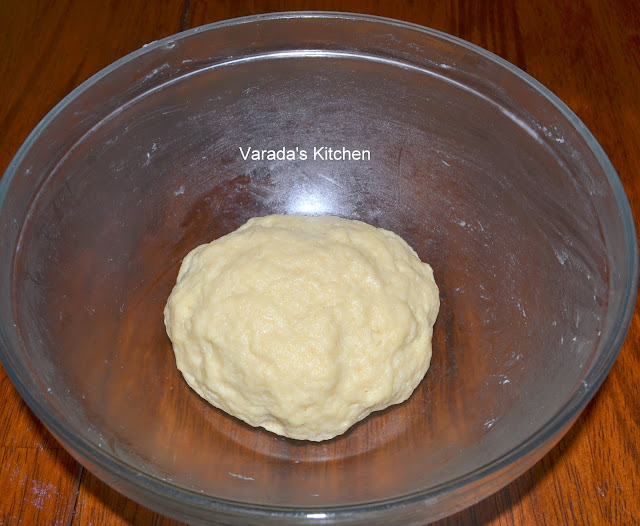 In the next hour fold the dough 3 times. Keep it aside, covered, for another 4 hours. 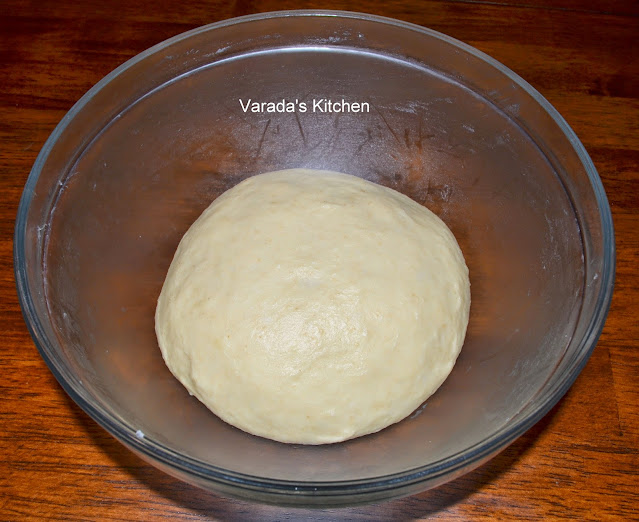 Transfer the risen dough to a lightly floured work surface. Divide into two portions. To shape each portion roll it out on the work surface to a flat disc the size of a side dish. Starting from one end roll tightly to form a roll. Seal the edges to prevent unraveling during baking.

Using kitchen shears score the top. Transfer the shaped bun to a baking sheet lined with parchment paper. Cover and proof overnight in the refrigerator. 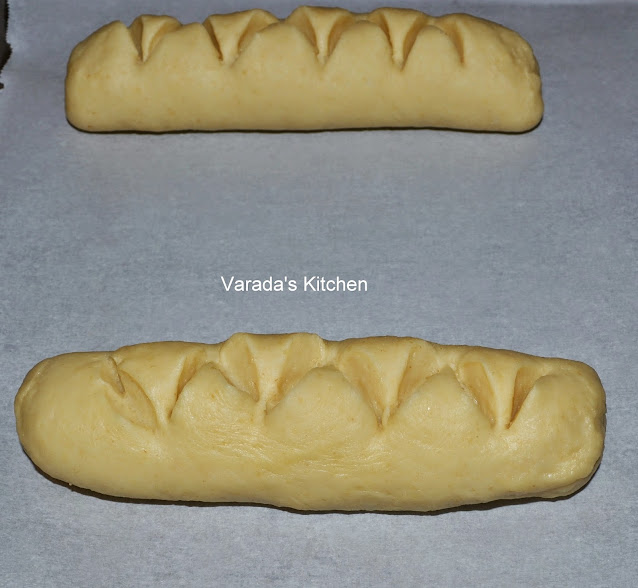 The next morning take the baking sheet out of the refrigerator and place it on the kitchen counter. You may not see much difference in the bread. It will not rise much in the refrigerator. Preheat oven to 400 F. 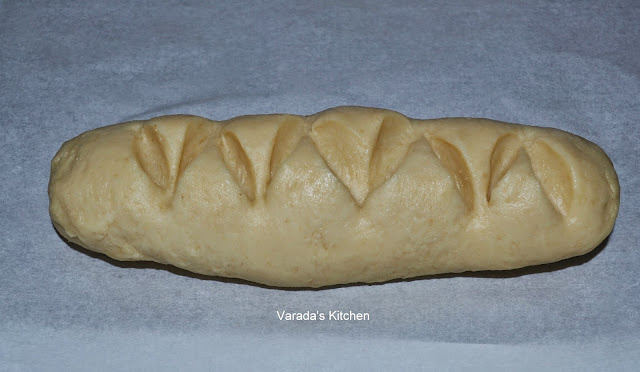 Bake for 12-15 minutes or until a tester comes out clean. You should see good oven spring. 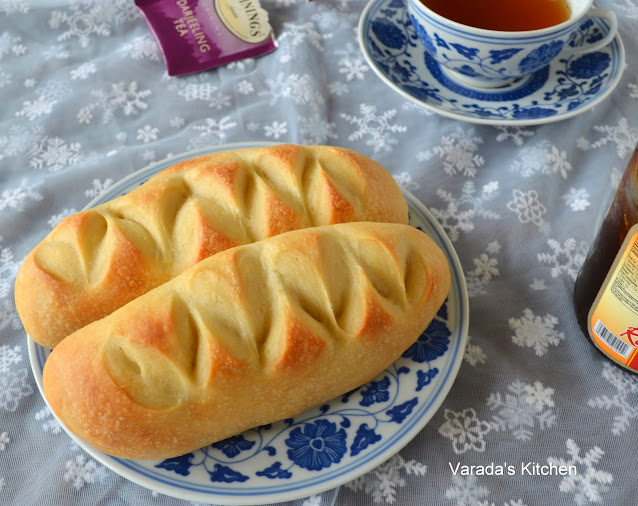 The buns taste best the day they are baked.