After all the fun last week it is time to move on to some real bread. This week I will post my attempts at recreating old bread recipes. These traditional artisan loaves are usually very tasty. They need work and time to allow the flavors to develop. But the end result makes it all worthwhile. The yeast in these recipes is either homegrown, a combination of commercial yeast with homegrown or just commercial yeast. The dough is either plain or enriched. The first of the lot is a sourdough batard. 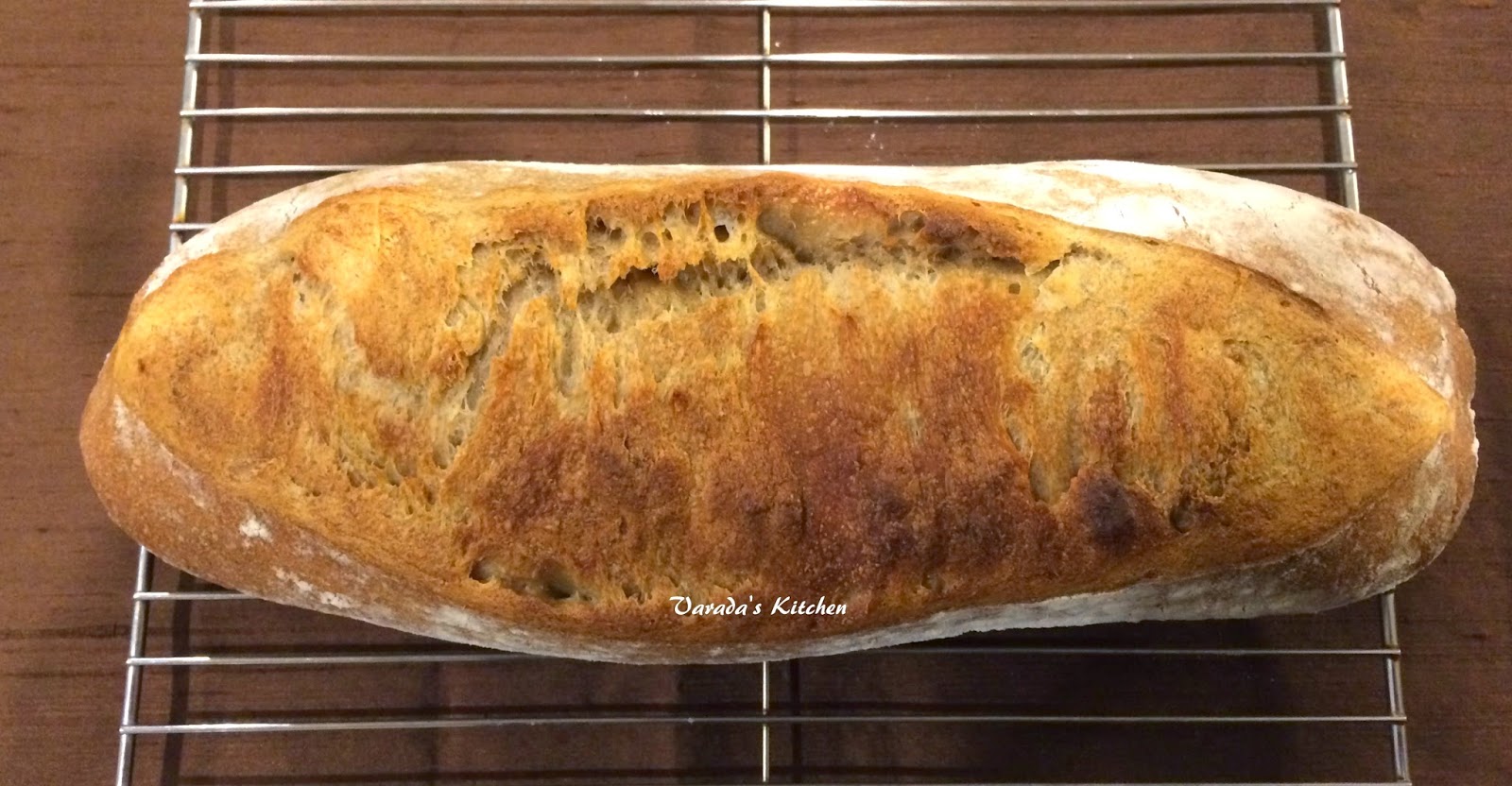 My first attempt at baking the batard did not go so well. The bread tasted great but was a little misshapen. I had decided to try a single score line through the length of the bread but at the last minute I made two. I guess I didn't quite do it right because the bread bulged to one side. I knew the next time I baked the batard I would stick to the single score.

I finally got my chance to bake the batard again and this time I got it right. The score line through the middle allowed for a even oven spring. I was happy with the look and taste of the bread. The crumb was open and even if I don't have a very good picture of the crumb I am going to share it. 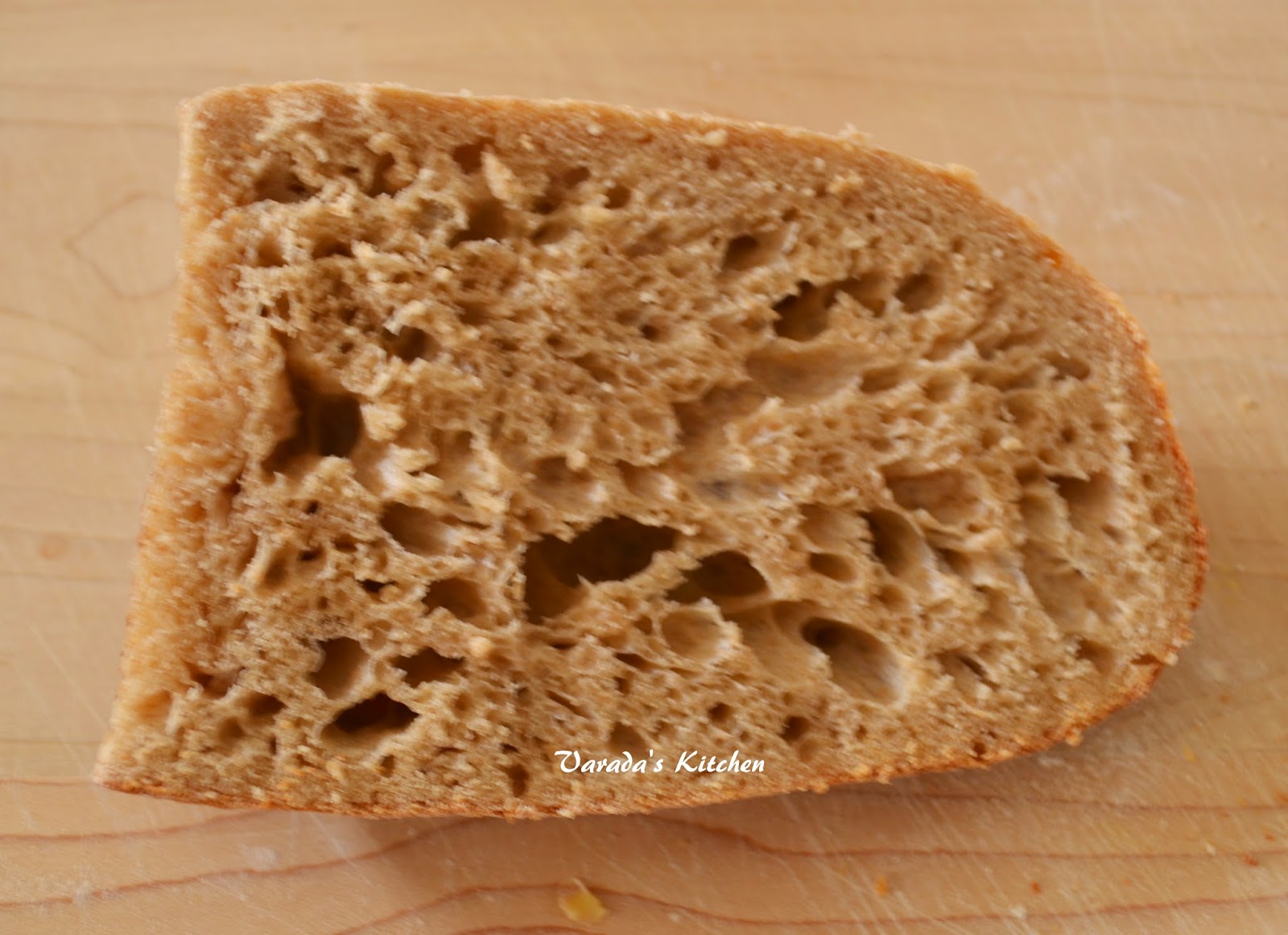 This was a recipe I put together with whole wheat flour and sourdough. It is similar to the baguette recipe but the proofing times were all crazy. I started it on a Sunday afternoon but forgot about it. The fold and stretch technique I use to strengthen the dough was not done on time. It was a little delayed. That left me with no time at night to let it rise. So I put it in the refrigerator overnight. Next day I did not get to it until late evening. That was an almost 24 hour bulk fermentation. I shaped the dough and placed it on a floured paper towel and put it back in the refrigerator. It was two and a half days before I got a chance to bake it. The taste was awesome. I have to say the long bulk fermentation may have helped. The next bread I make I will try an extended bulk fermentation again.

In a large mixing bowl add the dry ingredients. Then add the wet ingredients and combine to form a very soft dough. The hydration on this dough is over 70%. Keep aside covered for half an hour. Take the bowl and reach to the far side of the dough. Pull it up over the top of the dough towards you and tuck in. Turn the bowl a quarter turn. Repeat the stretch and fold. Repeat until you go all around twice. Cover and keep aside. Repeat the stretch and fold another two times. You will notice a difference in the texture. At the end of the last fold and stretch the dough will be smooth and elastic. Cover and keep aside for 6-8 hours or overnight in the refrigerator.

Take the cover out and transfer the dough to a floured work surface. Press down on the dough with floured hands. Fold the far side towards you about 3/4th of the way and press down gently with the heel of your palm. Fold the side close to you over the top and press down, like sealing an envelop. Now fold the dough in half and seal. Roll it a little to form the desired shape. Transfer to a floured towel and keep aside for the second rise. I usually keep it overnight (10-12 hours) in the refrigerator.

Preheat oven to 450 F. Place a baking sheet in the oven as it is heating. Remove the dough from the refrigerator. Using a very sharp blade or a lame score the top of the loaf end to end.

Transfer to the hot baking sheet and let it bake for 15 minutes. Lower the temperature to 400 F and bake another 25 minutes or until the top is brown. Remove from oven and allow it to cool completely on a cooling rack before slicing.