As the title states this is my second attempt at baking the perfect baguette. When I made my first attempt I had a new wild yeast starter and the baguette was my first bread fully leavened with the starter. That the dough rose was a big thing and so I was very happy with the results. A short eight months later my expectation is higher. An open crumb, thin crust, nice color and good scoring all in one baguette is the new dream. This baguette may not pass the stringent French rules with its length and weight specifications but I am sure no one would call it anything other than a baguette. Baking bread that crackles and speaks to me as it cools makes me happy. That is the bread that my family likes to snack on because it is tasty. Though I would have liked an evenly open crumb I am happy to have achieved my current goal.

The impetus behind this attempt came from Pradnya who blogs at The Pumpkin Farm. She set us this challenge as part of the tame the yeast event. I have to thank her for getting me to try the baguette again. I used my starter for this bread but I have given the recipe to use commercial yeast as well. The end result should be very similar as it is the technique as much as the ingredients that determine the end result. 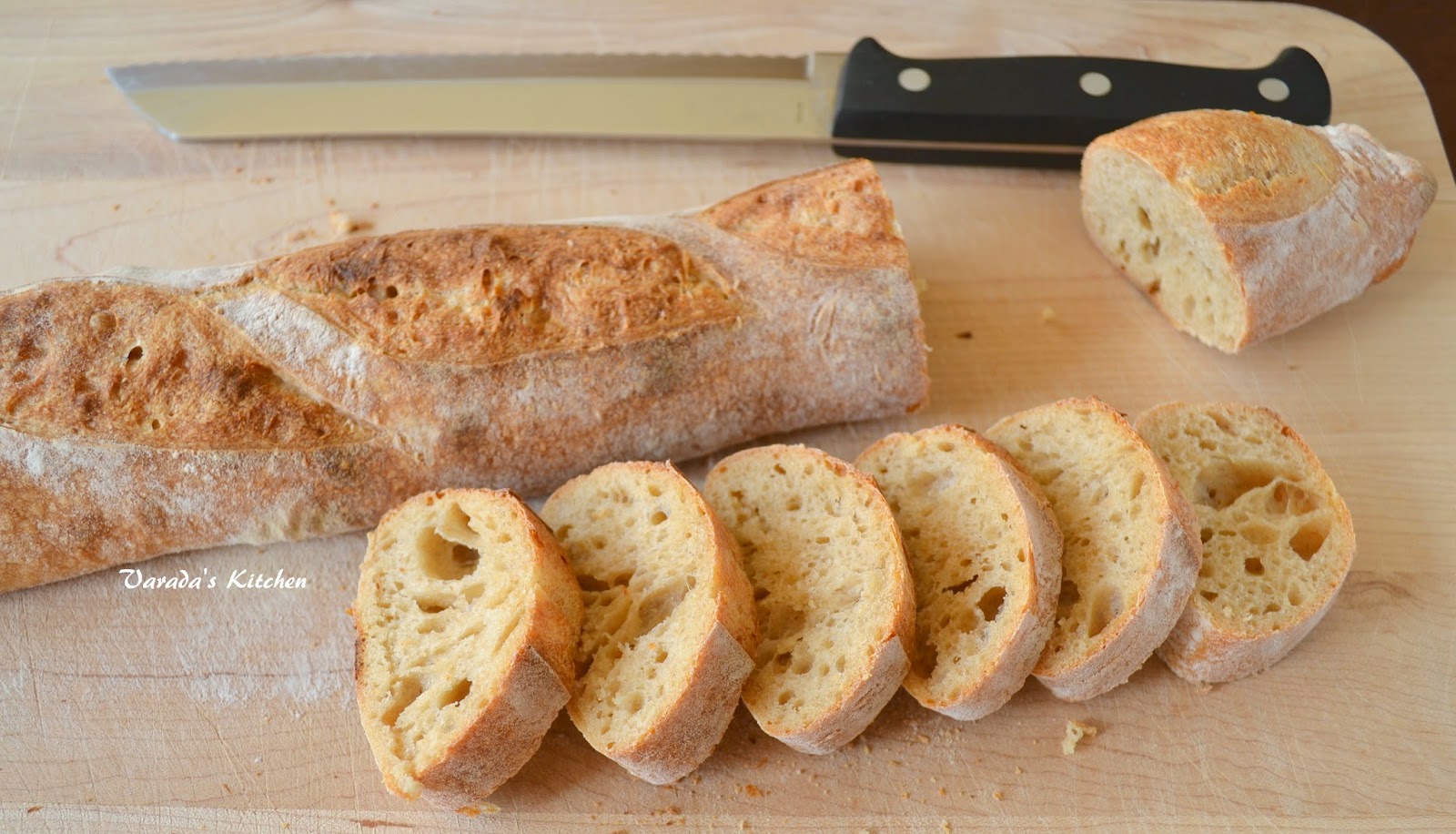 I had watched videos on how the baguette is shaped without letting the gas escape. But I had never really looked into scoring techniques. I learnt that from my friends at Artisan Bakers. I bought a razor blade, the kind I remember my Dad shaving with when I was really little. I used it to score the bread. I have always loved the darker colored bread peeking though the score marks and could not believe how easy it was to make it happen. If you use this technique make sure you get an odd number of score lines, they are supposed to look better than an even number. I could have overlapped the score marks a little more and that would have given me a straighter edge but for now I am happy with this loaf.

I baked my first artisan boule using the recipe from the book Flour Water Salt Yeast by Ken Forkish. Now I find myself using that technique for most breads I bake. I even used it very successfully for the sourdough buns I baked a few months back. I use a shorter (~5 hour) bulk fermentation following by overnight proofing. I put the cold shaped dough directly in the hot preheated oven without allowing it to come to room temperature. I followed the same technique on this loaf too. Except I put a cast iron pan in the oven in addition to my baking sheet. When I transferred the loaf to the oven I filled the pan with ice cubes. This created the much needed steam to form a thin, crunchy crust.

If using starter
Feed your starter. I keep 50 gm starter in the refrigerator. I feed it with 50-75 gm each of flour and water first thing in the morning and let it sit on the kitchen counter for a few hours. At around 2-3 pm I am ready to mix the dough. 50 gm of the starter goes back in the refrigerator for next time and the rest is used as needed in recipes. For this bread I needed 100 gm of starter so I refreshed the mother with 50 gm each of water and flour.

In a large mixing bowl add all the flour after running it through a sieve. Now mix in all of the water so that no lumps of dry flour are visible. Cover and keep aside for 20-30 minutes. This is called autolyse a process which gets the enzymes in the flour going by mixing it with water and letting it rest.

After half an hour sprinkle the salt over the dough. Add the sourdough starter or commercial yeast whichever you choose to use. Mix it in with the dough. You should break up the dough with your fingers and reform it at least twice to get all the ingredients to mix up well. Cover and keep aside. 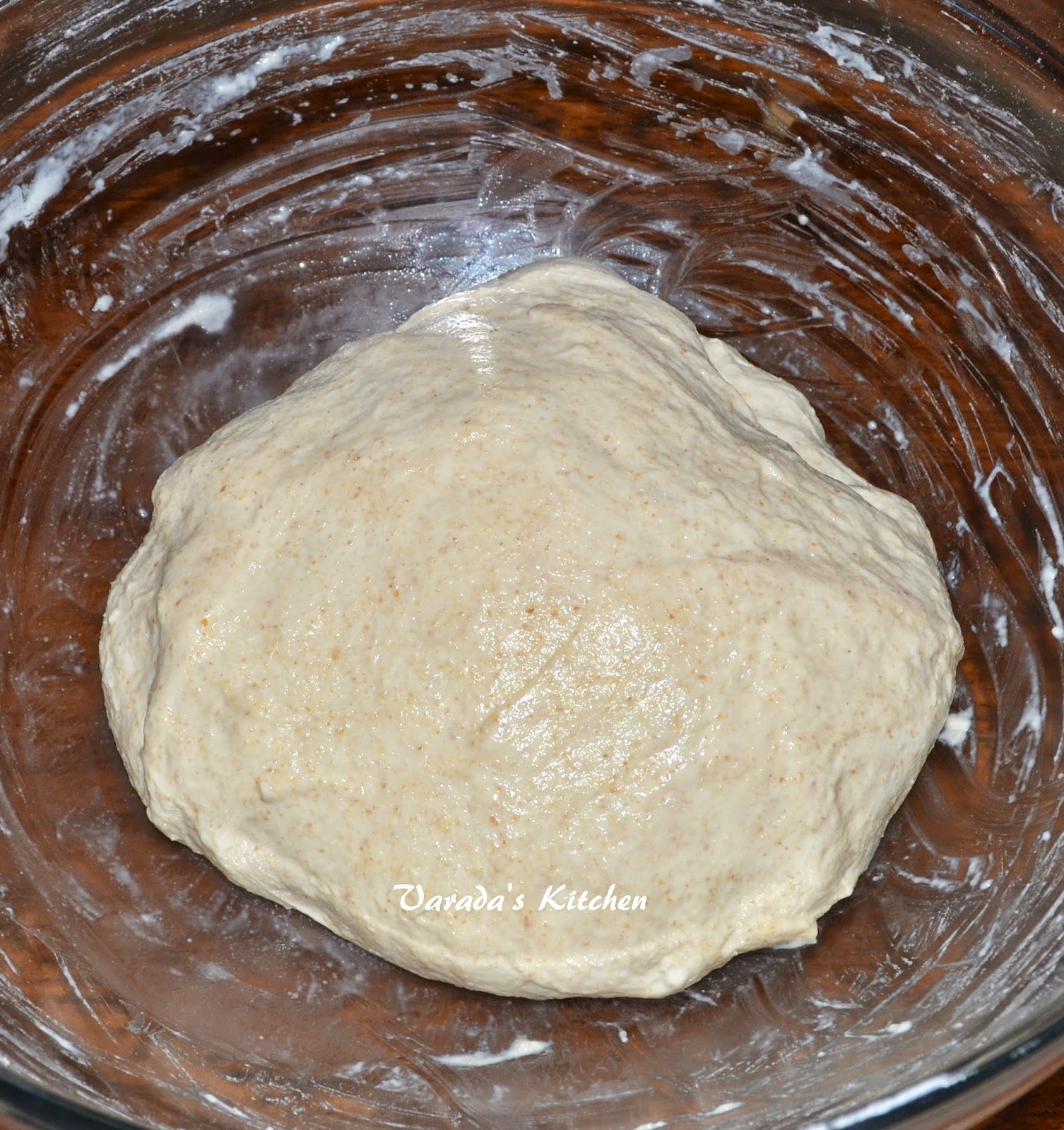 Over the next two hours stretch and fold the dough to strengthen it. The dough will be wet and not very stiff. Moisten your hands with water before handling the dough. You reach for the dough on the far side, stretch it up and fold it over towards you. Turn the bowl 90 degrees and repeat. When you go all around once you have completed one turn. You will gradually notice a difference in the appearance of the dough. It will get smoother and easier to work with. Cover and keep aside for another 3 hours for a total of 5 hours of bulk fermentation. 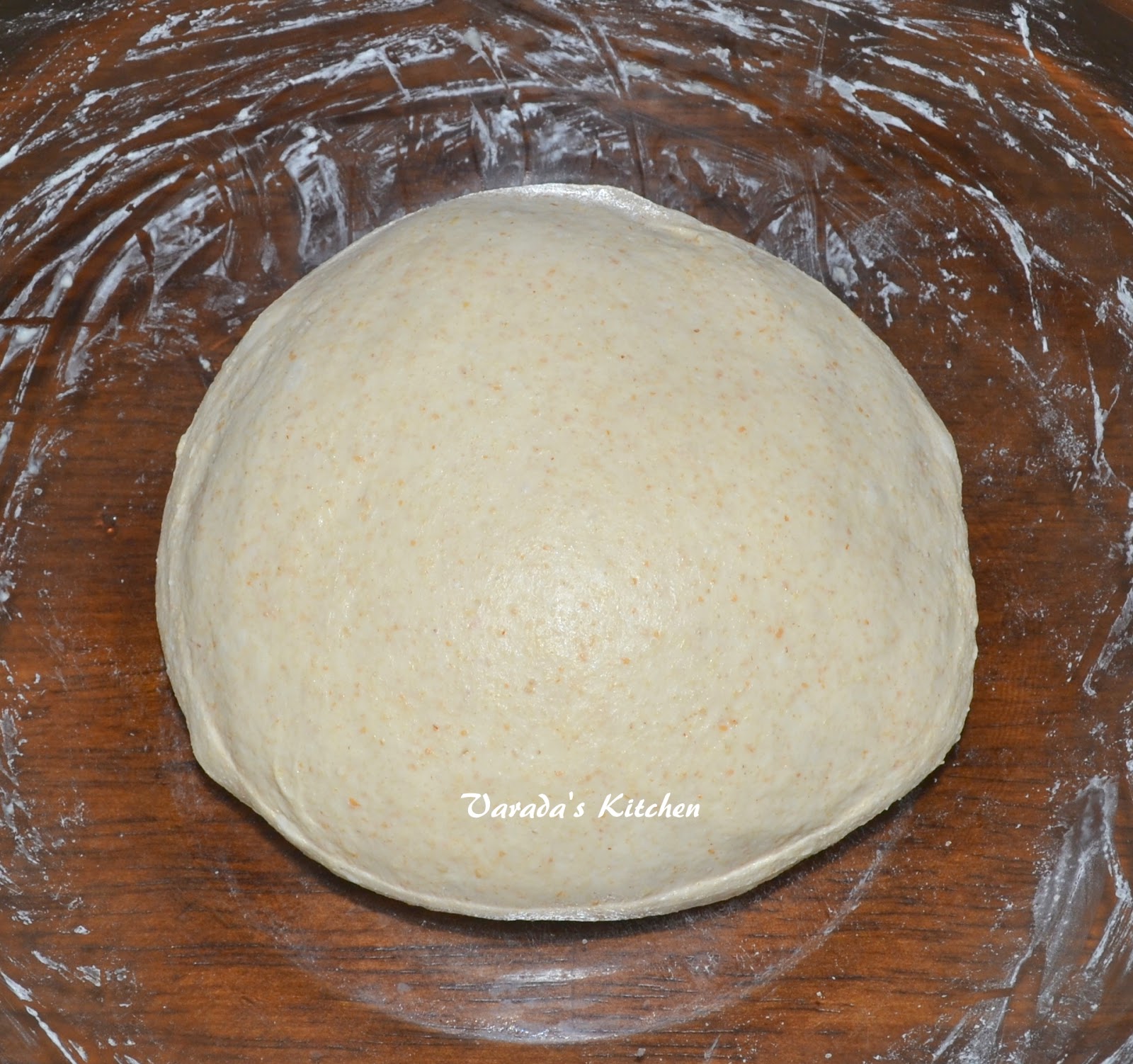 Prepare a baking sheet that fits in your refrigerator by spreading a couche over it. I don't have a couche so I used a dry tea towel. Flour the tea towel and keep aside until needed. Flour your working surface and your hands. Transfer the dough to the working surface. Without letting the trapped gas escape form the dough into a floppy rectangle. Do not take too much time to get the shape right. Fold the top third over the dough and press down with the heel of your palm to create tension over the fold.

Now fold the bottom over the top and do the same with your palm. Now bring the top and bottom together and press down gently again. This exercise is meant to create tension in the outer surface of the dough. Seal the edge along the length. Cup your hands over the roll of dough and gently roll back and forth to make it longer to the desired length. For sandwiches you may want it slightly thicker. I made it thin and long.

When you are satisfied with the length transfer it to the waiting floured tea towel. Pull up the edges of the towel next to the shaped baguette to help it retain its shape. Professional bakers place baguettes next to each other separated by the pulled up couche. However, I baked just the one so I placed wooden spoons on either side of the folded up towel to help the baguette hold its shape. 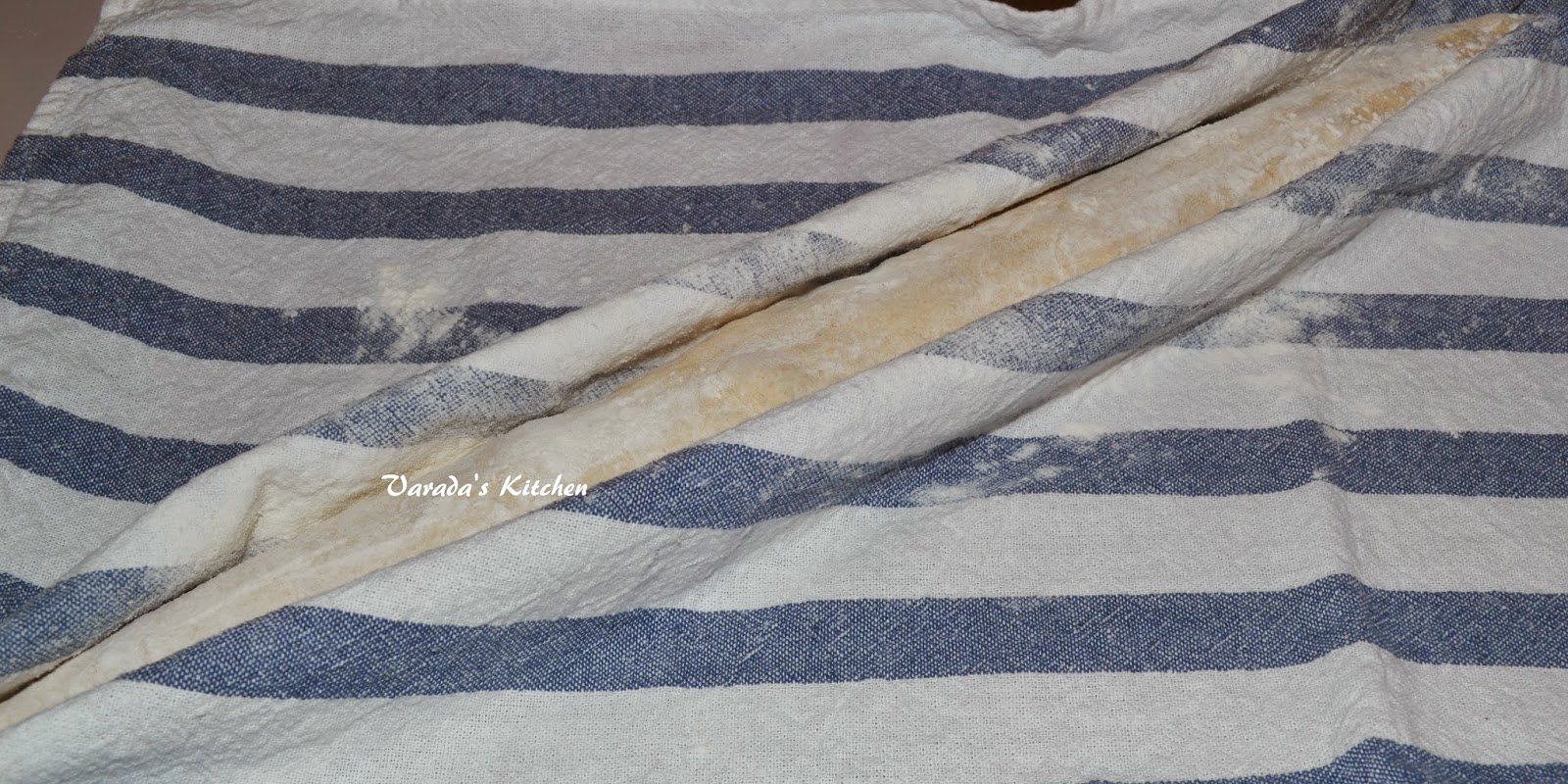 Cover the baguette with the rest of the towel and place it in the refrigerator overnight. You can bake the baguette any time the next morning. 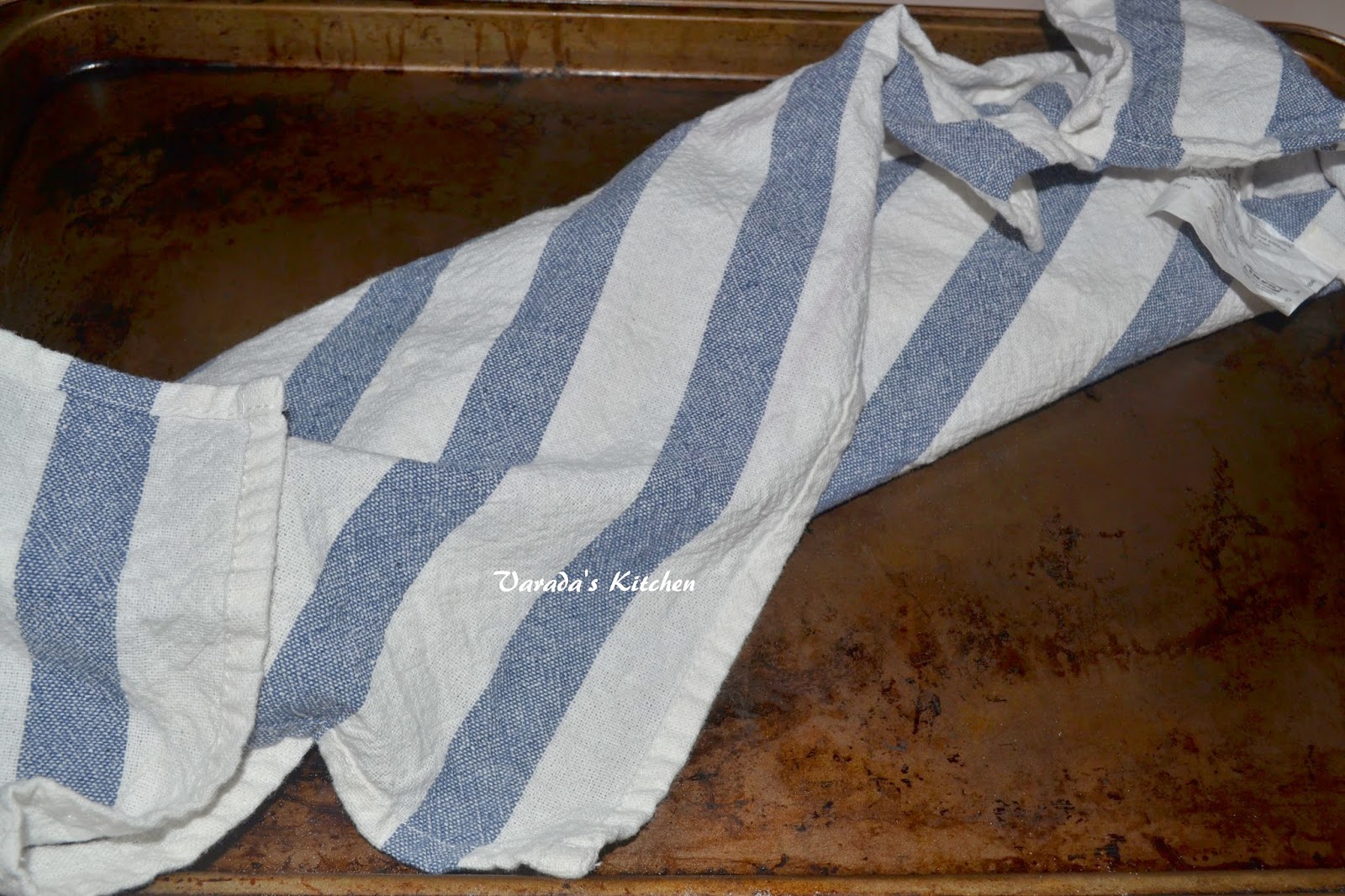 Let the oven heat for 5 minutes after it reaches 500 F. Keep a bowl of ice cubes or boiling water ready. Take the shaped baguette out of the refrigerator and put it on the kitchen counter. The cold dough will be firm and easy to handle. Handle it gently. 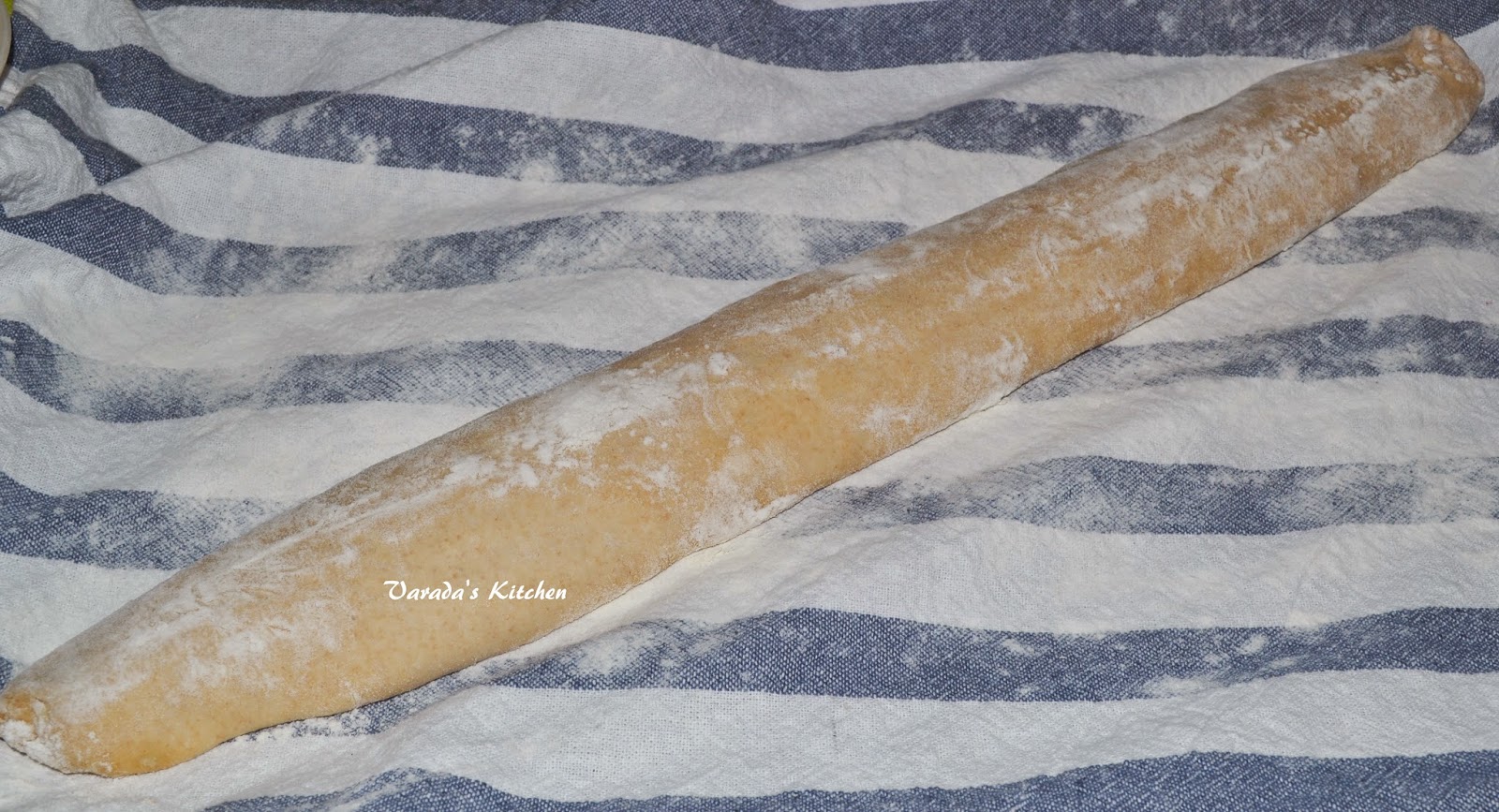 Take it out of the towel and ideally put it on a well floured peel. I do not have a peel so I floured the back of a baking sheet and used it to transfer the baguette to the sheet in the oven. Just before putting the loaf in the oven score it using a very sharp razor blade. The cuts should be almost vertical and a third of each cut should overlap. The overlap prevents the dough from looking lumpy.

Put the loaf on the hot baking stone, or in my case hot baking sheet, in the oven. Being very careful to protect the oven glass transfer the boiling water or ice cubes to the hot cast iron pan. Close the oven door and let the bread bake for 10 minutes. Remove the cast iron pan and allow the baguette to bake for another 15 minutes. I removed the baguette after 10 but next time I will keep it in for the additional 5 minutes for a darker color.

Remove the baguette from the oven and put it on a cooling rack. Allow it to cool completely before cutting into it.